Code of Conduct gets an update

Changes were made to the Keene State Student Code of Conduct policies over the summer.

All changes were outlined in an email sent to all students on August 31 from Jennifer Ferrell, associate VP for student engagement.

Most notably, fines and sanctions under the school’s Alcohol and Drug policy (AOD) were lowered.

The biggest change is the fine for third time offenses, $744 reduced to $500.

According to Dougherty, it now gives the hearing officer some leeway when deciding sanctioning.

Also, all gendered language has been removed from the Student Code of Conduct, Dougherty mentioned.

“There were some specific languages that mainly pertained to residential housing about using the improperly identified bathroom, we decided to take that out of the code,” Dougherty said. “We can address it in a different way if someone is doing that in malicious ways.”

Changes were also made to the Theft and Damage policy to “cover the malicious taking of items paid for by student fees,” the new language reads.

Timothy Bruns can be contacted
at tbruns@kscequinox.com 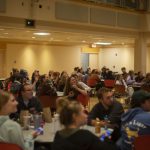 First third-week bingo held Previous
A week in volleyball Next 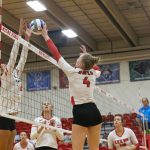