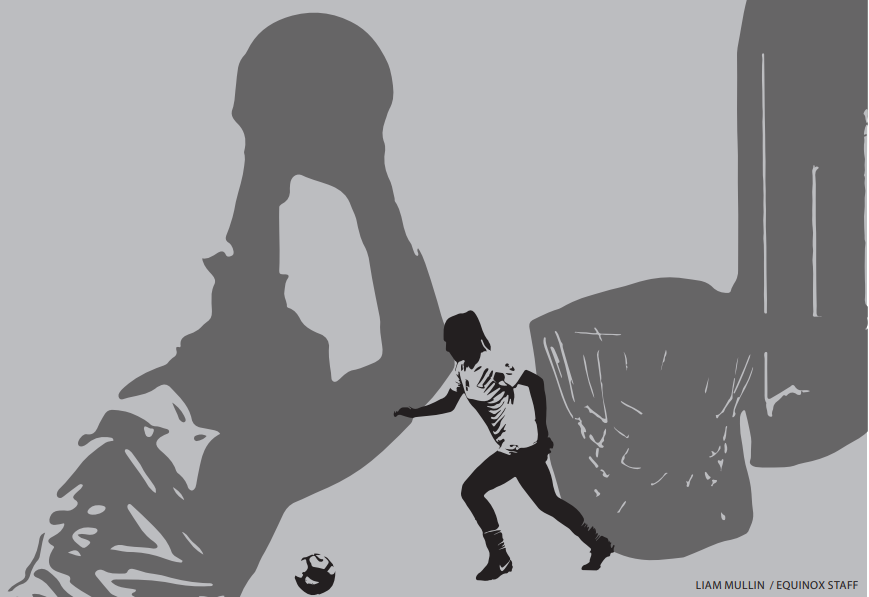 All of the club and varsity teams are considerably known on campus and amongst students. KSC has done a fine job of informing students about the athletic programs offered, but it can be argued that women’s teams aren’t getting the same amount of promotion as men’s teams.

The Equinox’s Sports section highlighted Universal Human Rights Month during the month of December and how athlete’s equality can be a part of that conversation. KSC has men’s and women’s teams for most of its varsity and club sports, but it is seen by The Equinox that advertising and promotion for the women’s teams tends to lack compared to the men’s teams.

Although promotion may not seem like a key aspect in the popularity of a team, it does have a major impact on how many people are in the crowd watching the games. A recent women’s, men’s basketball double header showed a drastic shift in audience attendance between the games. The women’s basketball team played in the afternoon and had a significantly smaller amount of people in the crowd compared to the men’s basketball game that played right after.

There could be several reasons as to why the women’s game had a smaller crowd. There is, however, a smaller amount of conversation amongst students about attending women’s athletics across the board. Most of the crowds at women’s athletic events are friends and family of the athletes; men’s athletic events tend to draw a bigger, more general audience from the student body and the greater Keene community. Word of mouth, flyers and social media are the backbone of promotion on campus for any event. To fill more seats at women’s sporting events, there needs to be a shift in how people talk about those teams.

The Equinox’s conversations with female athletes have the same conclusion. There is an understanding that members of society are less likely to attend women’s sporting events, and it can be assumed that it’s because people may think the games aren’t as entertaining. This assumption can also be connected to the NBA and the WNBA and the audience, salary, and popularity differences that are very obvious.

The Equinox sees equal representation and support for athletic teams as a critical part of supporting the student body. Promoting women and men equally in athletics isn’t only a matter involving athletes; it allows all students to feel like the college is taking gender equality seriously amongst all groups.

It is hoped that in the upcoming spring semester, students can find an updated outlook on women’s sports, and that the KSC community finds a way to equally support and promote women’s athletics.

0Shares
0 0
Randall Hall and Monadnock Hall to be considered for... Previous
Olympics boycott necessary but mishandled Next