President Biden recently announced that the U.S. will not be sending diplomats to the Beijing Olympics. The decision was made in response to the Uyghur genocides happening in the country’s Xinjiang province. We will, however, be sending athletes. I admit this sounded hypocritical at first, but now I think it’s the only move he could’ve made at this time.

The Uyghur people are a largely Muslim ethnic group living in the Xinjiang province of China. Recently, a tribunal made of lawyers, academics and businesspeople declared that the Chinese government has been committing crimes against humanity and human rights violations against the Uyghur people. Note that this tribunal was not government backed but was run and attended by people who wished to shed light on the atrocities being committed. The tribunal reviewed cases of alleged torture, forced abortions and sterilization, destruction of mosques and the horrific list goes on. All of these actions were allegedly supported by the Chinese Communist Party, who claimed they were to prevent radicalization and fight terrorism, according to an article by ABC News.

This is clearly not something that can be brushed under the rug. And while it may seem like a half-measure, the news has had an impact. According to Mike Mazza, a fellow in foreign and defense policy at the American Enterprise Institute, The Chinese Communist Party is censoring any news related to this story. Mazza also said that the party uses the games as a show of power, reminding the world that it can stand on the global stage. It’s clearly making an impact on the party’s ego, one that they are not happy with.

So, why still send athletes if this move had an effect? Well, it simply isn’t in Biden’s control. The president and congress of the United States don’t control whether athletes are sent to the Olympics every year; that is up to the U.S. Olympics Committee. Withholding diplomats was really the only thing Biden had the power to do.

I don’t think it is the duty of the committee to police their hosting country. While yes, the genocide and treatment of the Uyghur people is absolutely abhorrent, the point of the Olympics is to bring countries of the world together in sport. The Olympics are not a court. The committee is a non-governmental sports organization, and I don’t think it’s fair to have them take such a stand, especially when hundreds of athletes are ready and waiting to attend the games.

All that being said, I think this should be a lesson to the U.S. and to the world at large to take these things into consideration when choosing a location for the Olympics to take place. This genocide has been reported on for years, as far back as 2014 by my research. Nations with concerns over allowing a country with such human rights violations have had time to speak out against it and petition for a change. Waiting until now as the U.S. did, this diplomatic withdrawal is the only option left.

To be honest, I’m not sure I’ll be able to watch the Olympics this year. Seeing the fanfare, the celebrations and the friendly competition feels out-of-touch considering what is happening on the other side of the country. I hope that next time, action will be taken years before the games, not months.

Andrew Michaud can be contacted at 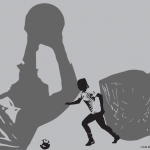