Event coordinators Emily Lambert and Taylor Dunne said they created the event as a way to get to know faculty outside of their departments and their work. Dunne said the event also arose from wanting to encourage community engagement. “I love working at a small college because of the creative work that people do. I find it really inspiring. I just wanted to tap into that community,” Dunne said.

Professor of music Craig Sylvern showcased his composition titled, “Benjamin’s Window.” The piece is part of a collection of 12 songs, all inspired by the Chagall Windows in Israel. Each of the songs represent the 12 sons of Jacob, Sylvern said.

Sylvern chose to showcase this specific piece because he said it holds a special meaning to him.

“Benjamin is my son’s middle name…. If you read about the description of the window, one of the blessings for Benjamin describes him as a ravenous wolf,” Sylvern said. “My son is named after my grandfather, whose last name was Wolf. It made a nice connection between the name Benjamin and… the wolf.”

Sylvern also said he used the melody of a song his grandfather sang to him as a child as the basis of the composition. All 12 pieces are musical reflections of what Sylvern saw in the windows.

Dery said pieces of herself are embedded in the story, specifically parenting and being a mother. In the film, Robin is seeking support from her mother but it is not readily accessible. Dery said this stems from her own parenting experience with having family members that live far away.

For the filming process, Dery hired a crew of KSC alumni. Dery said each alumni was also paired with a current film student to serve as an apprentice to give the students first-hand film experience.

Cynthia McLaughlin, professor of theater and dance, presented a sneak-peak at her newest piece “Waiting in Pieces.”

The inspiration for the piece started with a conversation between McLaughlin and Dery that explored the idea of mind and body separation. “In this work I am curious about the ways we are fragmented in our bodies,” McLaughlin said. “How do we “remember” the parts of ourselves that have become undone? I am also investigating themes of devotion and the sacred.”

Another element of the piece is the concept of the absurd. “I am always interested in presenting work that can sit with people in different ways, maybe even each time you see it,” McLaughlin said. “Something can be beautiful and profound while also being ridiculous, funny or maybe even dark and disturbing.”

The piece will be premiered at Re[Member]: An Evening of Dance in May. It is directed and choreographed by McLaughlin and will be performed by five KSC dance students.

Lambert and Dunne hope the event will become an annual series at Keene State College. “I hope that we do this every semester. Having the event online works well, but I hope we can have some in person,” Dunne said. 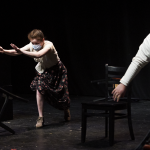