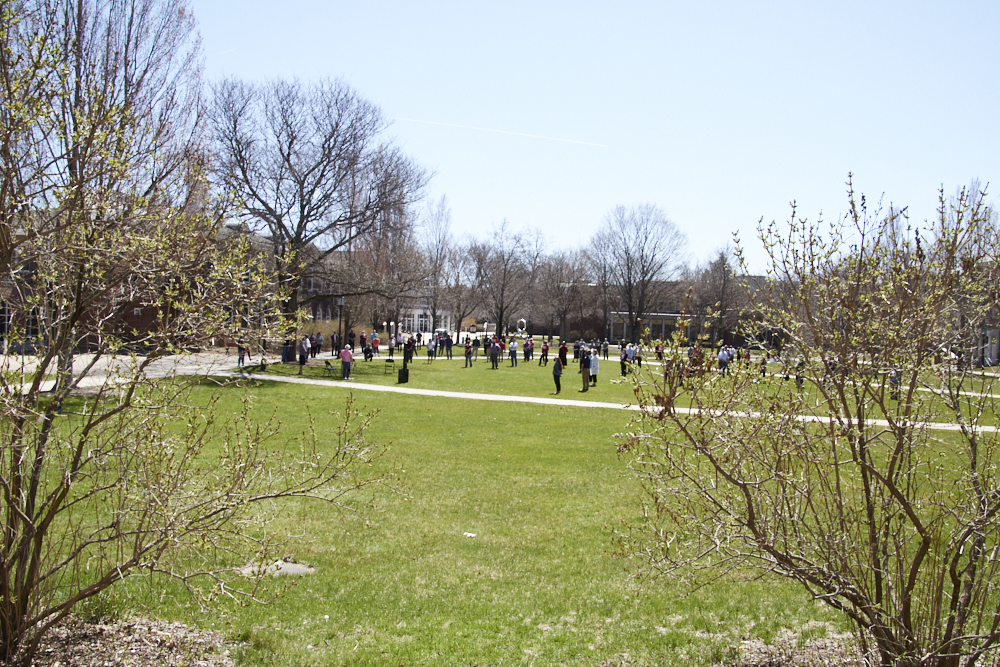 On Friday, April 9, the Keene State College community gathered to honor the passing of Gloria Lodge.

On Thursday, April 8, Keene State College’s President Melinda Treadwell invited the community to publicly grieve the loss of the faculty member. Starting at 12:30 p.m. the event consisted of faculty members paying tribute to Gloria Lodge which even included a musical performance from one of her first advisees The Equinox advisor and professor of multimedia journalism Julio Del Sesto’s band Life on Venus where their song “Broken Halos” was dedicated to Gloria Lodge.

At the event was ASPIRE – Educational Counselor Christine Hrynowski. In terms of the event Hrynowski said, “I’ve worked here 14 years and so there were people that I knew that had retired that came back for it, which was lovely. And some of those people spoke, obviously, a number of people from Academic Career Advising where Gloria worked. And I think that Julio’s story was so impressive… That was someone that was one of her first students and grew up and became a very well, well liked faculty member on Keene State campus. I mean, that must have meant the world to her that just really must have.”

Hrynowski also said, “Melinda had known Gloria for quite a while and I liked the connection with Melinda and her kids at CDC (Child Development Center) and Gloria’s office being right where she could hear the kids when they were lining up outside the CDC because she’s right on the ground of the first floor of Elliot, and she would go out there and she would, you know, she would go out there and talk to them, or if they should invite them in and they’d walk down the hall and I loved that connection when Melinda said that. So, yeah, I think it was a really nice Memorial. I think she would have been very humbled to hear how much of an impact she had, because I don’t think she had a clue.”

Speaking on the legacy left behind by Gloria Lodge, Hrynowski said, “Her love for the institution, for the faculty and staff that were there… and for the students…

she has over 800 friends on Facebook, and they’re not just you know, people, some people just have friends on Facebook, and they’re people that they occasionally communicate with. Gloria, well, those are true friends. But, you know, I look at them. And I’m like, you know, this is an alum… But you know, so here are all these people that have left Keene State, but you still see comments on our Facebook page from these people. And that, I think, I think that’s the legacy [her] kindness, her acceptance, acceptance of anyone that she ran into. I often saw her talking to our custodian, Lynn in the hallway. You know, she just, like I said, she loved to talk to anyone and to help people in any way that she could.”

Also at the public memorial was Senior Human Resources Assistant Karyn Kamminski. Kamminski said the public event was the right thing to do. Kamminski explained, “I think bringing the community together for those people who wanted to be here. To share with each other was really, really important. And to remember Gloria and for, for all of us to just remember her commitment to you know, the college community, the students, the staff, the faculty to all of us and how, you know how I mean, I think I think by doing this, it helped us to maybe remember a little thing about Gloria, as well. So I think it was really, really, really good. And it’s such a beautiful day.”

Kamminski also recounted her first encounter with Lodge and how their lives became intertwined since that fateful meetup. “When my first child was born, actually, I was leaving the hospital with my child from Peterborough. Gloria lived in Peterborough and happened to be coming into the hospital when I was going out. I don’t know what the reason was for her going in. But the first thing she did was look at the baby and said, ‘Oh, my gosh, what a cute little baby.’ I didn’t know who she was. I’ve never met her. She’s like, Oh, well, thank you and that was it. Then, two or three weeks later, I was here on campus because we were interviewing for the Director of Human Resources. And so I came back in; I was on maternity leave. But I came back in to meet the people who were applying for the position and Gloria was the one of the candidates.”

Also speaking on the loss to the community and aid to students is Assistant Director of Multicultural Recruitment Kevin Justice. Justice said “I’m all about student support, and I do a lot to recruit students in the job that I do. And one of the most important things is when a student chooses to come to Keene, the things that I talked about happen for them while they’re here… And Gloria is kind of the epitome of the example of what support is for students and, you know, having her here and having her as someone who I knew, any one of my students that ended up on her desk, would be supported to the highest level.” 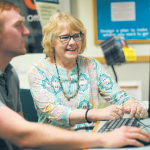 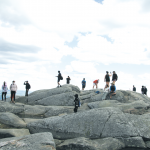