Keene State College’s Thorne Art Gallery opened its doors to the Keene community for its annual Holiday Ornament Show on Thursday, Dec. 8 from 4 to 6 p.m.

At 5:30 p.m., Professor Emily Lambert judged the ornament contest where the winner won a $25 gift card to Brickhouse Pizza in Keene.

“This is like the fifth time we’ve done an ornament show, but we usually do it at the Carol House,” Thorne Director Paul McMullan said. “The students make ornaments and usually it’s just fun and they’re not very serious, usually it’s just our year-end.”

McMullan mentioned that he was excited to be able to open up this event to members of the community again.

“COVID shut us down, you know COVID shut a lot of things down, we are just trying to bring it all back,” McMullan said.

McMullan said that the event was open to anyone and that the money raised by the commissions is donated.

“It’s open to everybody, whoever needs an ornament… We usually sell about a hundred dollars worth of ornaments and so we give that money to the Hundred Nights Homeless Shelter in town,” McMullan said.

Senior graphic design major Maddie Waris was at the event selling screen prints and described the process behind creating those screen prints.

“I started out with an image in Photoshop and then my design gets printed onto this piece of plastic and we basically expose a silk screen,” Waris said. “Once the screen is exposed with the image, I can print as much ink as I want on it and I make the prints over and over again so you can change the color of the screen multiple times.”

Waris said that she enjoys that the graphic design program allows her to be creative and take part in projects such as the ones for sale at the Ornament Show.

Waris added that this event was a great way to close out her last semester at KSC.

“The print stuff I think was new this year [to the event], but we’ve always had the ornaments and the ceramic stuff, so it’s exciting. I know I’m on my way out, but it’s exciting to be a part of this,” Waris said. 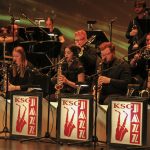 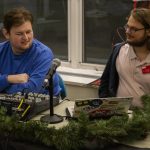