These concepts were presented in Weather Makers Dance’s show “Deep Sleep,” which they brought to the Redfern Arts Center’s Main Theatre on March 29.

Riley Lynch, owner of Weather Makers Dance, said the concept for “Deep Sleep” stemmed from her experiences in motherhood. “It was inspired by having two children and feeling incredibly sad that I was done having children,” Lynch said. “That for me was very traumatic and a really hard transition… through those emotions, I found many other ideas that were sort of a spider web from that.”

Sarah Jordan, stage manager and close friend of Lynch, described the role she played with “Deep Sleep.” Jordan said, “From the beginning, my goal has been to support the vision that Riley has created.”Jordan continued, “Whether that’s just simply showing up to a rehearsal or working through lighting design, or making sure people feel comfortable, that we’re on time.”

Jordan described the show as, “A show where you’re living the experience at the same time as the performers… this undulation of memories and your own experiences that are triggered by the next thing, and it’s almost as if your emotion is actually feeding the performer’s next movement.”

As the characters in the performance moved towards finding acceptance within themselves and within each other,  Lynch hoped that the audience would channel this into their own lives. “I want them to see a piece of themselves in it,” Lynch said. “I want them to walk away feeling like it’s okay to do the wrong thing sometimes and [that] it’s okay to grow and change.”

“Deep Sleep” also experimented with the concept of a past life. “You are a person that’s existing now; however, through your dream, you’re traveling into a past life that you had that you don’t know,” Lynch said. “It’s your subconscious that’s accepting all of these things that have happened to you in past lives. It’s memories, but maybe not specifically your memories.”

To Lynch and Jordan, “Deep Sleep” is more than just a dance performance. “History is preserved through art,” Jordan said. “History is the emotional response and the creation of philosophies around the hardest things we experience.”

Lynch started Weather Makers Dance in 2013 and since then has been the only consistent member. Auditions are held for each show and numbers depend on how many people Lynch needs for that particular show.

“I need 10 people sometimes, I need one person sometimes and [sometimes] I need a flock; it depends on my vision,” Lynch said. “I would say that every single company member is incredibly valuable and irreplaceable… each show is unique.”

The company name, “Weather Makers Dance,” was created when Lynch realized that the elements of weather played a pivotal role in their shows. “Deep Sleep” included elements such as rain and wind. “Lot’s of dances about wind, lots of dances about rain, many dances using those soundscapes,” Lynch mentioned.

Weather Makers Dance will be performing at The Thing in the Spring at Brewbakers Cafe in Keene on Friday, May 20.

The Equinox reached out to Dance Professor Cynthia McLaughlin for comment but was unable to interview due to scheduling conflicts. 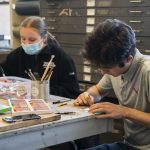