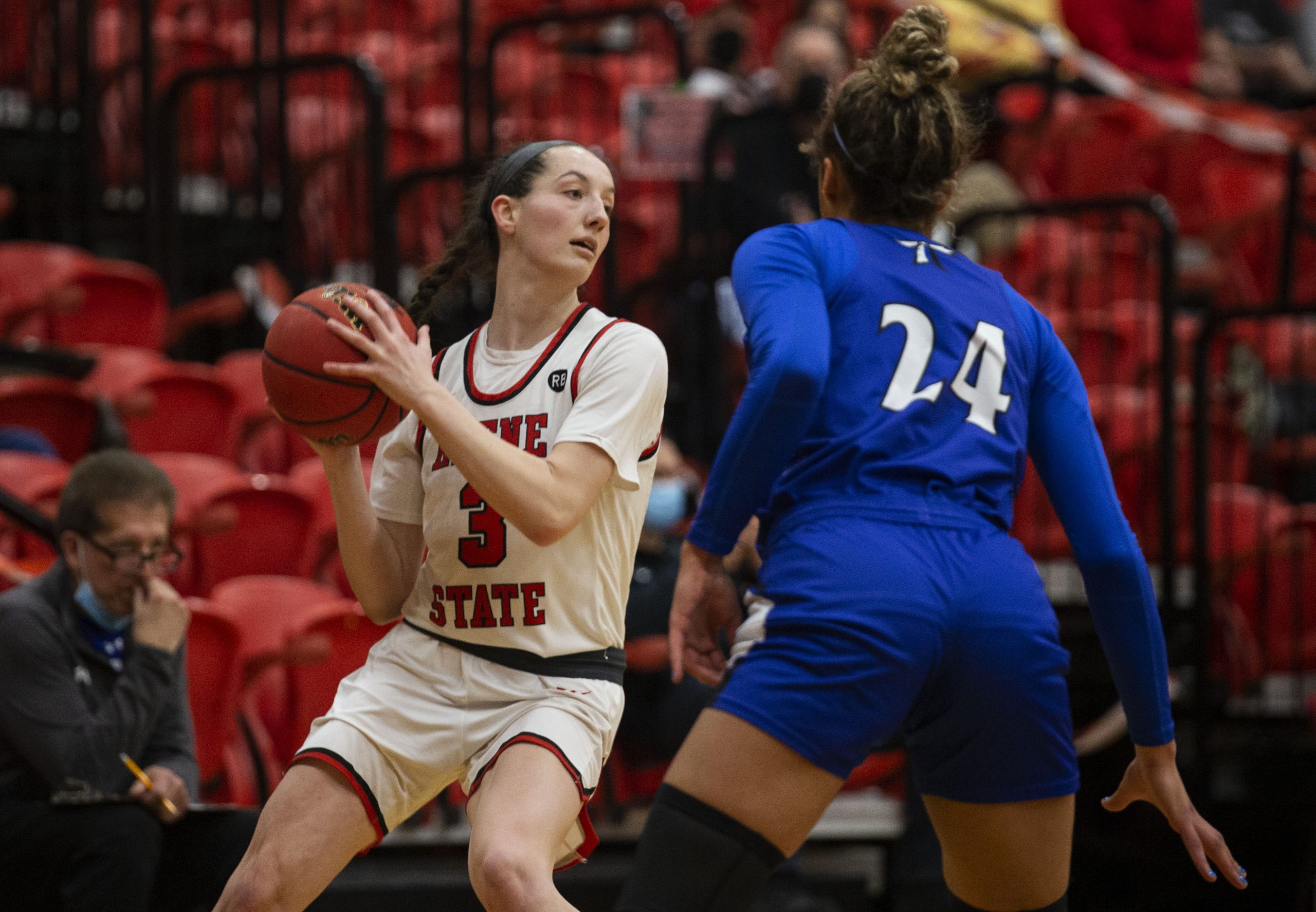 The Owls saw their season end against the University of Southern Maine. This match took place on Tuesday, Feb. 22 at 6 p.m. at Hill Gymnasium.

Southern Maine beat Keene State for the third time this season, with the Owls holding yet another opponent below 40 percent shooting overall from the field. Southern Maine started the game out with a constant lead through the first quarter. That lead ended up being disrupted by junior Hailey Derosia with just 22 seconds left in the first quarter. The second quarter saw Southern Maine trying to take their lead back, and ultimately succeeding. The Owls committed five turnovers and, as a team, made just 2-of-11 shots in the second quarter, both by Derosia.

Southern Maine made just two field goals in the second quarter themselves, as Keene State’s strong defense kept them within 22-20 at the halftime break. Southern Maine came out with a 9-4 push that took about four minutes of game time to take, at the time, a game-high lead (31-24) midway through the third quarter. The Owls were never closer than five points after that, and managed only three baskets in the third quarter. Southern Maine led by double-figures for most of the rest of the game. Ahead 41-28, Southern Maine tallied six of the opening seven points of the fourth quarter in less than two minutes. A triple from senior Brianna Metellus and a layup from sophomore Rylee Burgess a little less than four minutes into the fourth quarter sliced Keene State’s deficit to 11 (47-36), but Southern Maine’s Michelle Rowe made two free throws with about six minutes left to diminish any building momentum for the Owls.

Two layups by Burgess in the ensuing minutes were part of a small 5-0 push to make it an eight-point game with about two minutes left. The Owls had three shots to draw even closer, but missed each one, and Southern Maine put the game away by going 4-for-4 at the line and getting a layup from player Victoria Harris. The game ended the Owl’s season, with Southern Maine leading 55-45.

Earlier in the week, the Owls visited the University of Massachusetts-Boston at the Clark Athletic Center. This game took place on Saturday, Feb. 19 at 1 p.m.

Entering the match, the Owls and the Beacons were locked into a tight battle: a win by UMass-Boston would guarantee a home playoff game, and a win by Keene State would give them a chance of having a home playoff game. The Owls could have finished as low as seventh with a loss, but they did not have to worry about that because, even after a rocky start where they trailed 6-0 while never leading in the opening quarter, they intimidated the Beacons during the game’s final 26 minutes, ultimately turning a seven-point deficit into an 11-point win. The Owls dominated this match, finishing 52-41. First-year Aryanna Murray buried 5-of-7 from three-point range while scoring a game-high 17 points. Metellus came off the bench to score 11, making three of her seven tries from deep.

The Owls invited UMass-Boston to their Senior Day and final regular season home game on Friday, Feb. 18 at 3:30 p.m. In the opening 20 minutes, the Beacons shot 14-for-25 (56 percent) from the floor as they took a 41-27 halftime lead. Keene State made a major push in the third quarter, cutting a 14-point deficit down to four (45-41) after an 11-1 burst in just three minutes of game time. Metellus had five of those points, while Derosia had four. After an Owl miss from long range, a layup from UMass’s Vienna Monestime made it 54-45 with 6:57 remaining. After getting within four points in the fourth quarter, the Owls missed five of their next six shots; they were never closer than seven points again. The Owls just couldn’t keep up with the Beacons, with the game ending 68-56.

Derosia saved a season-best scoring output for her final regular season home game this season, putting in 23 points on 9-of-19 shooting to go along with eight rebounds and eight steals.  Keene State stayed in the game despite being thoroughly outshot as a team, partly because they forced 21 turnovers and had a 20-9 scoring edge off miscues. Metellus added 10 points and five rebounds, while Murray recorded 10 points, four assists and two rebounds.

The team celebrated seniors Jenny Freedman and Brianna Metellus at their Senior Day game on Feb. 18.

The Owls will make their return to the court next fall.