As February comes to a close, so does Black History Month; however, diversity has the ability to be celebrated globally everyday.

Keene State College continues to do its best at supporting the idea that celebrating diversity, especially within athletics, is one of the most important duties an institution has.

Athletic Director Phil Racicot said that diversity is a common conversation within the athletic department, and that they are constantly working on ways to talk about it. “We work with our campus Office for Diversity and Inclusion on initiatives, such as a program we have developed called Maximizing Potential through Diversity; we are currently working on follow up programming in that area. Additionally, we participate in [National Collegiate Athletic Association] Division III Diversity week which features a social media campaign – also a [Student Athlete Advisory Committee] initiative.”

He continued, “When we connect, challenge and engage others with perspectives that may be different from our own, there is no question that we will be more successful in achieving our overall goal to be champions for life. With regard to Black History Month, it is important that we join the rest of the country to honor past and present African American student athletes, coaches, and staff, and hope to have these discussions with our staff and team throughout the month and the year, for that matter.”

Women’s basketball guard and senior Brianna Metellus said that diversity is important to her as a person of color in athletics. She said, “What it means to me is that there’s different background that’s on the team, not just our specific team, but other teams as well; and getting to know each other and where we come from and understanding the different points of view – we’re learning their side as well, so I feel like it’s just different identities coming in.”

Metellus said that her teammates make her feel comfortable even though she is in the minority group of her team. “I feel like my team is aware of how situations can make me feel uncomfortable and also they know what may trigger me – like what topics can be touchy, and they’re supportive as well. Like, if I may not speak up on something, they will,” she said.

Metellus discussed that she hopes that Keene State can try to continue to improve on the number of individuals from minority groups that attend the school, especially individuals that have the potential to be student athletes. She said, “It’s hard… I feel like just getting more people of color to come here – I know it can be hard, because everybody knows it’s a predominantly white school – but I feel like, if they can do a better job of getting more…I don’t know how that would be possible…I feel like it is the sports that make up a lot of the population – like I know the men’s [basketball] team is a majority of [the people of color in athletics] – so I feel like if other sports as well can do the same, then it would just grow upon that.”

Metellus added that she feels that the Diversity and Multiculturalism Office is a good resource on campus, and the office makes her feel that diversity is being fairly represented and discussed on campus.

Dottie Morris, Associate Vice President for Institutional Equity and Diversity, said that her work is to promote and support efforts related to “diversity, equity, social justice, inclusion, and the list goes on.”

When asked what she hopes Keene State will be able to continue to improve on when it comes to diversity, Morris said that she hopes the conversation can be translated in different ways. She said, “The way that I think about diversity – it’s not like some people think about it. I think that we’re all really, really diverse – as many people as we have at Keene State, we have that degree of diversity because of all of the social identities that we hold. I don’t think we talk about that enough, because I often hear people say we have no diversity at Keene State and then I say ‘well, is everybody the same gender, is everybody the same age, have the same sexual orientation, practice the same religion?’ And, as you start to unpack what diversity is, you find that – so I think we don’t talk enough about how we are diverse and it would be helpful if we had people with additional identities represented; but, to say that we’re not diverse, that’s not a great place to start…”

Regarding how she got into this line of work, Morris said, “It was one of those things that…it wasn’t anything that I planned to do. Many years ago, one of the vice presidents of academic affairs asked me to come in and do some work because of his concerns around making sure that [Keene State] adequately prepare[s] students to live in a more diverse world.” In 2008, Keene State was looking to fill the position Morris currently holds, and she explained that she could not pass up the opportunity of helping the institution fairly represent diversity and equality.

Morris said that she would like to see diversity become a larger foundational piece for institutions such as Keene State. “I’d like to see where it becomes the framework that we use to do all of the work that we do, and not only increasing the number of people from various backgrounds, but also the principles that underlie equity, diversity, inclusion, social justice. And it becomes just the fiber of the institution, and we become known for that throughout the United States,” she said.

Morris said that athletes specifically are an important and impressive group that represent diversity at the collegiate level. “One of the things that I think is really powerful is that, of all groups of people, athletes know that diversity is important, because you can’t have a well-balanced team without having people with diverse skills.”

Morris continued by saying that the athletes and staff within the athletic department are eager to continue the conversation regarding diversity at the school. “One of the things that [Phil Racicot and I] did is that we did a kick-off event years ago…we did a program called Maximizing Potential Through Diversity, and every [athletic] team went through this workshop…the plan is to build on that, to continue that, because, again, I hate to keep blaming covid, but it takes a lot of time for the athletic department to really figure out how to navigate through covid at this point and have good seasons and keep all the student athletes safe. So, there’s still conversations that are being held, there are some of the student athletes who are really interested in foraging something that is campus wide, so I think that that’s important to point out, is that the process has started,” she said.

The Equinox reached out to cheerleading head coach Gillian Lawrence and senior men’s lacrosse player Krantz Medeus for a comment. They did not respond. 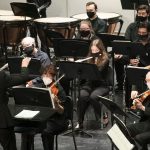 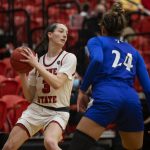