Now that sports have moved inside, the Little East Conference (LEC) has handed down their All Conference Team awards for this season. Keene State had more than a few decorated athletes this year due to the work they put in over the semester.

Phil Racicot, Keene State’s Athletic Director, talked about what it means to the college and to the athletes to be a part of the All Conference Teams. “Obviously it’s a great honor to have student athletes recognized by the conference,” Racicot said. “Usually it’s a good reflection of the success of the team, but it’s always great to see there’s some recognition of the individual efforts [of the athletes].” Racicot said he feels the KSC teams were successful despite not winning any championships. “We did compete at a really high level,” Racicot commented.

Racicot also addressed the way the athletes are chosen for these awards. “Each of the sports has its own sport code, and within that sport code in the conference… it’s all voted on by the coaches,” Racicot said. “Every coach in the conference has a vote… it says a lot about somebody when the coach at one of the other schools, they identify somebody that’s from Keene State as being a top performer.” Racicot also noted that “A lot of it is based on [field] position.”

Keene State received awards for each of the three All-Conference teams. The three teams of postseason awards are players who are considered the best in the sport by LEC coaches. Players selected for the first-team are considered the best players in the sport, second-team selected athletes are the second best players, and third-team players are the third best. Racicot recounted the award winners from this season. “We had two in field hockey on the first team, and one on the third team… In volleyball, we ended up with three people on the second team… In men’s soccer we had two LEC first teamers… and women’s soccer had one first teamer and then we had a third teamer… the way cross country does it is the top seven is the first team, and then eight through fourteen is the second team.” Keene State women’s volleyball winners are Emilyann Ashford, Kacie Blanchet, and Sydney Johnson, who were awarded second team. The women’s soccer winners are Alex Kennedy, who was awarded first team, and Kayleigh Marshall, who was awarded third team. The men’s soccer winners are Denis Fleming and Benny Tamzarian, who both received first team. The women’s field hockey winners are Irini Stefanakos and Maggie Cahoon, who were awarded first team, Emily White, who was awarded third team, and Molly Edmark, who received the Keene State 12th player award. Racicot said he thinks that many of Keene State’s LEC teams have a pretty good future in the coming years.

Racicot, who is a non-voting member of the awards committee, talked a little about the behind-thescenes of creating and giving these awards to the students who win them. “Which [being a committee member] doesn’t mean I vote, all I do is work on the structure of the awards,”

Racicot said. “You know, what types of awards do we want to offer, and work with each of the coaching groups to see which sports are going to do third teams and what the awards are for first team and that kind of thing.” Racicot also said, “We spend a lot of time in the awards committee on team awards, and championships, and what those plaques are for individuals (individual awards/ championship medals).”

As for what these awards mean for the students who won them, Racicot said, “It’s like the end of the season accolade… Seasons are over, there’s no ‘get together,’ no all star groups… It’s a nice feather in their cap, it’s a nice recognition, and then they’ll get an award in the mail.” 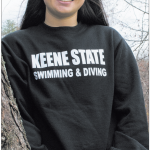 Jang swims toward success Previous
A look behind the curtain Next 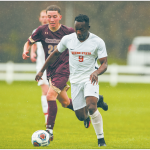