Up and coming athlete Sarah Ames brings tenacity to the track

First-year Sarah Ames is revving up and running to win.

Ames got her start in cross country in middle school. She said that all her friends were doing it and she joined because it was the thing everyone was doing at the time. “It was kind of just for fun, but then I started actually getting good at it. So, then I was like ‘Oh I guess I should actually try to pursue this.’” She continued with it through high school and has been dedicated to the sport ever since.

Her successes on the track date back to middle school. Ames has never been one for the limelight though. “I feel like I don’t always feel like I did something good, you know, it’s strange… I feel, like, uncomfortable when people congratulate me because I don’t really let myself deserve it, not on purpose though,” she said.

Ames has had some setbacks in her athletic career. In high school, she was injured for two years during her cross-country seasons. “I could not run or race and that really affected me because I saw all my teammates running together and it was just tough because, obviously, I wanted to run with them and there was nothing I could do about it.”

As a first-year student, Ames has had to adjust to college life while being a student athlete. She said she had trouble at first because of her heavy class load and the responsibilities that come with being an athlete, but now she knows how to handle it. “I’m starting to realize what I can do and what I can’t.”

Ames has had struggles with the mental aspect of her sport. “There are times where it’s more of a mental struggle than physical. I know physically I could be able to do it, but mentally, I hold myself back because I’m scared of failing or not doing what my coaches or team needs me to do,” she said.

Ames has been able to push through those struggles and come out on top for herself and her team. “When I get too nervous, I just have to remind myself that it’s not the end of the world, whatever happens happens, and I’m prepared for whatever…and it’s cheesy, but I like to say YOLO (You Only Live Once),” she said.

Ames said she is most inspired by upperclassmen cross country runners. “Seeing them, I want to be able to be successful like them.”

Ames has hope that she will keep getting better and better. Her short-term goal is to improve her time but, most of all, her team has goals that she hopes she can help them accomplish. “One of our team goals is to win [Little East Conference] championships so I would really like that to happen for all of us, that would be fun. I’ll try to help my team do that, that would be great,” she said. And, like every athlete, she just hopes that she won’t get injured.

Ames’s teammates and coach only have good things to say about the athlete.

Aurora Couto, first-year teammate, thinks that Ames is determined and persistent on the track. “She’s one of those runners, she just puts her head down and she gets it done. She doesn’t complain, she just goes for it,” said Couto.

Couto said she would describe Ames as “humble”. “She knows that she’s good, but she’s not going to throw it in your face, which I really like about her. Quiet determination is how I would describe her,” said Couto.

Paige Mills, Keene State Cross Country Head Coach, said that Ames started off on the right foot this season. “Sarah is incredibly hardworking, very coachable, and always has a great attitude. She just can go there, she can get in the right headspace, put in the work, and push herself. She’s just a dream to work with,” said Mills.

“We all love her, to be honest. It wouldn’t be the same without her,” said Couto.

Mills said that Ames keeps improving every week and she has big goals for the rookie runner. “She’s the real deal. She’s going to do big things for Keene State. She’s going to shine at the Division III3 level. I really think she’s national caliber,” said Mills.

Ames was named the Little East Conference’s (LEC) Runner of the Week and Rookie of the Week for the week of October 4. She placed eighth overall in a field of 120 at the Keene State Invitational on October 2, finishing the 5k course with a time of 19:46:1. With an average of 6:22 per mile, Ames was the highest finishing LEC runner in the 13-team race.

Ames has something she would want to tell future student athletes: It’s worth it. “To have a team or a group of people who will always be there and who you can really bond with, I think that really helped me. I would say that at first, it’s going to be a lot, being a [first year] in college anyway is a lot, but I think that it’s worth it and you’re going to have a lot of fun. You’re probably going to have to sacrifice some things that other people are doing, but you just have to have the right priorities if you really want to be successful in what you’re doing.” 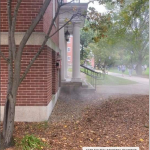 Steam problem damage interrupts Huntress classes Previous
In doubt, swim it out Next 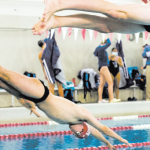