In doubt, swim it out

After over a year of virtual and cancelled meets, the Keene State College swim and dive teams are excited to finally have a normal season and get back in the water.

The season for men’s and women’s swim and dive started about two weeks ago, with the first meet being on October 9, and everyone is ready to have in-person meets again this season.

Sophomore Ben Stafford explained that this year is different for him personally, since he has never swam with the team not under COVID-19 guidelines.

“I’m looking forward to seeing how we can all do as a team in our first official season since like COVID happened because I didn’t really get to experience it as a [first-year] last year, so I’m just excited,” Stafford said.

Not only is everyone excited to get back in the water, senior diver, Brianna Feldman, who will not be diving this season due to injury, is excited to get to know all of the new people she hasn’t had the chance to meet before.

“Most people know that I took the semester off to get my military training so I wasn’t able to actually learn anyone on the team nor know anyone. So coming back this year, I was kind of granted the opportunity, even though I’m not diving,” said Feldman.

Feldman is not the only one who is looking forward to meeting new people on the team. Sophomore diver Emma Stelzner says that the team is looking for places that everyone can meet outside of the pool.

“I know our coaches and the captains are working to include the swimmers and divers more so we can get a chance to just hang out and get to know each other more,” Stelzner said.

Each swimmer has their own list of personal goals for the season. Senior captain Tyler Young, who plans to graduate in May, has some high expectations for himself for the remainder of the season.

“I want to end my career with some personal bests and also, as the captain, I just want to leave a good legacy here and hopefully lead the team next year to succeed as well,” Young said.

Stelzner also has a personal goal, one that may get difficult as the only diver this season. “Not overwhelm myself when it comes to my diving, which is something I do a lot,”

Due to COVID-19, the team could not all be together last year during practice. This year, that is a huge goal for head coach, Chris Wooldridge.

“I think we’re able to be together, which we didn’t even have the entire team together the whole first semester last year, like it never happened because we were trying to keep down small clusters. So being able to have everybody in one space is going to make a big difference for us. It’s hard to get messaging across when it’s fragmented,” Woolridge said.

The goals for this team this season are pretty clear. Stafford, Young, Woolridge and Stelzner all have very similar team goals.

“I think the team goal is we definitely want to make it to the LECs and then just do our best, but the biggest one is going to the end and all that,” said Stelzner.

“Certainly do well at the LEC meet,” said Woolridge.

“Our first goal is to win LECs, which is the Little East Conference meet. That’s a doable goal,” Young said.

“I mean, we’re going to hopefully be undefeated the whole season. It’s the first year that it’s a national championship. Yeah, so honestly it’s obviously win that. I think we have a really good shot, the women as well,” Stafford said.

The first official meet of the season happened this past weekend. Although the men’s meet was cancelled due to a lack of swimmers on the other teams, the men still did time trials. For the women, they faced off against ColbySawyer and Stonehill. Read all about the results of the women’s meet and the men’s time trials in Keene crushes in competition located on page B6. 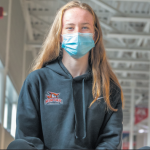 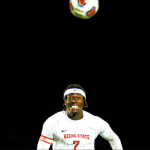