‘The Perks of Being a Wallflower’: Movie Review

Released in 2012, “The Perks of Being a Wallflower” is directed by Steven Chbosky and stars Logan Lerman, Ezra Miller and Emma Watson. Lerman plays Charlie, a kind, shy, smart, high school freshman. Charlie suffers from depression and has an extremely hard time fitting in at school. The story follows him as he makes friends with seniors Sam and Patrick (Emma Watson and Ezra Miller) and finds happiness and confidence in himself through this friendship.

This was my first viewing of this movie, and I could not have been more impressed. In terms of coming of age genre, the film works perfectly and in terms of a comedy-drama, it does not disappoint. A reason this film is great is because it offers characters that almost every person who watches the film can connect with. Whether one is in high school or not I think most of us know what Sam, Patrick and Charlie experience trying to fit in, because even after high school it can be tough, but what we all should learn is to never be afraid to express our true selves.

The cinematography is incredible and adds to the emotional experience; when there is a serious moment you feel every ounce of emotion the character is feeling through cinematography, and it is supported by editing and music. Notably, there’s a scene where all three characters are driving through a tunnel and Sam stands up going through the open car top and yells confidently as the song ”We Can be Heroes” by David Bowie plays. It is the feeling of free spiritedness at its finest.

The performances are all fantastic with Emma Watson, Ezra Miller and Logan Lerman all giving one of the best performances of their careers. When you see them play these characters, you do not see actors playing characters – the person you see is the character.

While this film is great, I will warn people that it is not a comedy, and there are serious themes addressed in heavy detail such as homophobia, sexual abuse, depression and PTSD. All of these themes are explored maturely, and I think the film did great addressing all of them, but I would still say if you watch, know the subject matter is very intense and important and I would strongly recommend watching with someone if you can for that reason. However, covering integral and prevalent issues is never a criticism, and I had an amazing time watching this film, and I think you will too, especially if you love John Hughes’ style of realism in depiction of teenagers and if you love films about nonconformity. Not everyone has experienced Charlie’s exact journey, but all of us can relate to embracing who we are and right now, I feel we need to be reminded to be proud of everything about ourselves. Give this film a look to discover what it means to “feel infinite.” 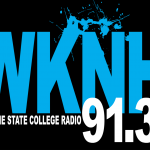 50 years of WKNH Previous
Music-making by Mead Next 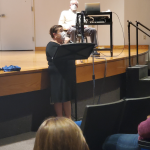