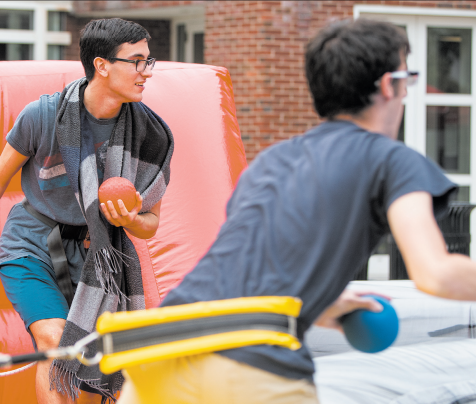 Student Involvement at Keene State kicked off the start of a six-week schedule of activities last Friday with a water-themed event.

The event, titled Aqua Amusement, was held on the student center lawn and started at 12 p.m.. It featured a bucket drop, an inflatable slide, free gelato samples courtesy of Frisky Cow Gelato and a large inflatable game called Hippo Chowdown, which was described by Casey Brown, a student-employee working at the event, as “the live version of Hungry Hungry Hippos.” The Alpha Sigma Pi fraternity was also present on the lawn where they had a table set up with prizes that could be won by scoring on a dartboard.

The event is the first in a series that Student Involvement will be hosting once a week for the first six weeks of school. The events are an effort by Student Involvement to move on from the lack of events last year as well as giving first-years a more traditional start to the semester with plenty of activities on-campus. “We’re doing them for the first six weeks of classes this year,” said Brown. “As a part of letting first-year students and sophomores who didn’t really get that first few weeks of college experience get some fun activities going on.”

Last year due to stricter masking and social distance requirements, most events were held either virtually or not at all. Although a complete return to normal hasn’t been possible yet, Brown believes that it is important to keep having events like these in person. “I think it’s really important to show students, in a very visible way, that their student activities dollars get used on them. And it’s really important, especially for first-years and sophomore students who have not had the easiest time in COVID transitioning to college, that we can still do fun things, especially when they’re outside.”

Despite large group gatherings being discouraged by the college, holding the event outdoors was able to provide some security and peace of mind for those attending the event. “I think that because it’s outdoors, the ventilation is very different than doing an indoor event, and I think that it is worth the risk so students know that there are still things possible to still come and have a good time at,” Brown said.

Students at the event held similar opinions when it came to possible safety concerns. Alexa Holmes, a junior attending Aqua Amusement, said “I think it’s alright because we’re outside and we’re being safe, and, for the most part, distancing.”

As for tighter restrictions, students were most concerned with large indoor gatherings, such as off-campus parties. “People who have large gatherings should be, I don’t want to say punished, but they should be facing some consequences…I think that’s the main spreader, I don’t think events like this are,” said Holmes.

One reason events like Aqua Amusement are viewed as being safer than other large gatherings is because it is controlled. Students at the event trusted the Student Involvement members who planned the event to keep attendance safe and well-regulated. “It gives students a positive outlet that’s managed and under control, so not too large of a gathering,” said Nicole Graczewsky, a sophomore attending the event. When asked if events like this should continue to be held she said, “Yes, it keeps the students safer, I hope.”

To demonstrate how the Student Involvement office is keeping the events safe, Brown explained the steps taken to limit the spread of COVID. “Especially holding events outdoors, one of the biggest things is that if it can be done outside, do it. And then always providing hand sanitizer, and the inflatables are professionally cleaned before they come to campus, as well as trying to promote distancing as much as possible.”

Despite a rising number of positive tests, students are hopeful that these events will continue to be held safely, giving the school year a more normal feeling, and keeping other students from participating in less controlled, more dangerous gatherings. For those interested in attending next week’s event, it will be held on Friday at the Fiske Quad at 8\p.m., where Student Involvement will be showing “In the Heights” starring Anthony Ramos and Melissa Barrera. 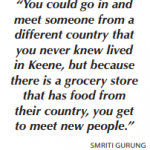 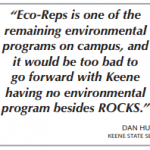