“We became aware of a situation with baseball where one member of the team had a positive test,” explained Keene State Director of Athletics and Recreation, Phil Racicot. “We became aware of that situation near the end of the very first game, so we were able to remove that student from the field.”

Regardless of the positive test, Racicot explained that the first game of the double header was completed and the second game was cancelled.

“We did not want to prolong any potential exposure for the safety of our team and the other team, as well as the umpires,” said Racicot. “Our campus rapid response team determined that it was the best decision to cancel the second game. We had to meet with the umpires and the coaches and explain that the second game would not happen that day and that we would have to make it up from that standpoint.”

Racicot clarified that the Western Connecticut athletic director, baseball coaches and players were informed of the positive immediately after Keene State found out and that everyone agreed to complete the first game.

“In the sport of baseball… probably the greatest concern of any kind of transmission would have been with our team,” Racicot explained. “And it just so happened to be that that particular individual was not playing that day.”

Racicot confirmed that the Keene State player had been in the vicinity of the dugout, however Keene State protocols state that masks must be worn while in the dugout and players must remain socially distanced.

While the Keene State player had not received their Thursday testing results prior to the game on Friday, Racicot explained that Keene State College protocol was still upheld.

“We are still making sure that every student has a [negative] test within 72-hours [of playing a game],” explained Racicot. “We are not putting anyone out there that is not cleared within a 72-hour time frame.”

The Keene State player on the baseball team had received a negative result from Tuesday testing, which was within 72-hours of the Friday game.

Two other Keene State College athletic teams are in quarantine as well. Men’s lacrosse has been placed into quarantine after finding out about a positive player during a full-team practice.

“We had a student-athlete here test positive… essentially right around the same time that we got the information about the baseball we got the one about lacrosse,” explained Racicot. “It was during a practice that we became aware of it, so we stopped the practice. The situation with [men’s lacrosse] was that this was on a Friday and they had previously played on a Tuesday. We did go back to the opposing school we played on Tuesday and let them know what our situation was.”

Men’s lacrosse had competed against Castleton University on April 20 and Racicot clarified that Castleton was not affected by the positive case on the Keene State men’s lacrosse team.

Field hockey is also in quarantine after a player on Plymouth State’s team tested positive shortly after the Keene vs. Plymouth game on April 21. Racicot explained that field hockey being quarantined was out of an “abundance of caution” due to the Plymouth State player becoming symptomatic after they received their positive result. 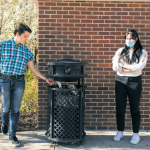 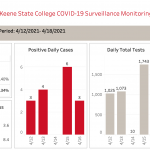