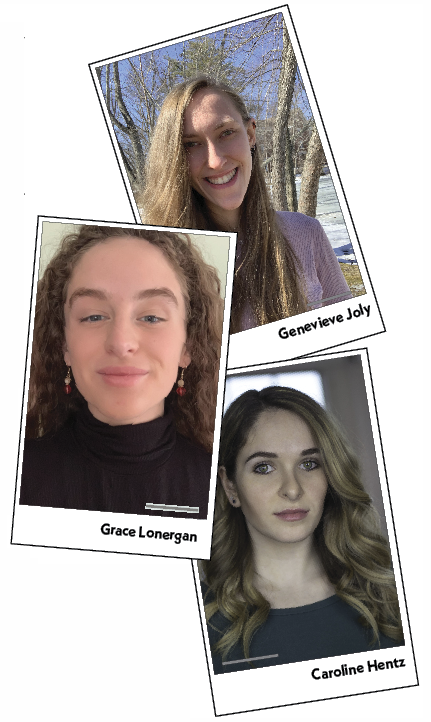 To summarize her experience at Keene State, directing student Caroline Hentz used the word “growth.” Upon first coming to KSC, she recalls feeling hesitant and unsure.

“When I came to college, I was very nervous and I wasn’t sure about anything in my life and my future, but over the course of my time here I have met some truly amazing people and mentors that have opened my eyes and shaped me into a confident and functioning adult,” Hentz said.

Hentz noted a production she did her sophomore year titled “A Dream Play” that she said helped her evolve in her discipline. She said that being on stage for the full 90-minute duration of the show taught focus and concentration as an actor.

“I will always hold that experience close because I feel I grew the most as an actor through that,” Hentz said.

Jeannie-Marie Brown, Hentz’s academic advisor, also saw “A Dream Play” as an important moment in Hentz’s evolution as an actor. “She carried the role and the entire production of ‘A Dream Play.’ It was what it was because of her,” Brown said.

Last year’s production of “As You Like It” was also a highlight for Hentz, in which she served as assistant director. Staying true to the Shakespearean-era, the audience was encouraged to heckle the actors during the performance.

“Every night sitting and watching the actors respond to what the audience was doing and saying to them was so incredible and hilarious. The theatre was the most alive I had ever felt before,” Hentz said.

Brown expressed having total faith in Hentz’s plans post-graduation. “I have no doubt that whatever Caroline sets her mind to, she’ll make happen,” Brown said.

“And I think along the way, she’s going to inspire those who are around her. So I’m really excited to see what the next steps will be.”

Genevieve Joly, a technical design student, entered Keene State College as a dance major. That trajectory changed when she worked on the college’s production of “Company” her first year. Joly said her involvement in the show was only supposed to be the fulfillment of a class requirement for the dance major, but it became more than that.

“That was the show where I decided to become a technical theater major,” Joly said. “I had never worked tech before… I learned so much that semester, I was definitely thrown into the deep end. But it was such an incredible experience.”

“As the assistant technical director for the theater and dance department, her role is to support my work and the department’s work,” Lindsay said. “It’s the whole gambit of what happens in the theater.”

Joly is currently working as co-technical director with Lindsay on the upcoming production of “The Last Five Years.”

“In COVID times, I can’t think of a better partner in crime,” Lindsay said. “She’s so trustworthy, dependable, smart. She thinks ahead. She’s so kind. She understands her role as a leader.”

Joly described her experience at Keene State College as transformative. She feels her evolution speaks for itself in her rise from having no technical experience to holding the position of assistant technical director.

“I obviously started with no experience. And now I’m [assistant technical director]. So that is absolutely an incredible development,” Joly said.

Lindsay reflected on seeing Joly grow as a person and in her craft. “I think, more than anything, she’s developed as a really strong leader,” Lindsay said. “Like, I could see her just going out into pretty much any job or field, whether it’s theater or not, and she’ll rock.”

Grace Lonergan, a senior dance student, thinks of her experience at Keene State College as one filled with fun.

“Even with all of the challenges and learning experiences above all, especially in the dance department, we have fun,” Lonergan said.

Cynthia McLaughlin, coordinator of dance at Keene State College, cast Lonergan in her production “Fruitopia” her first year. During that production, McLaughlin saw Lonergan’s potential as a dancer.

“I remember a shy and bashful but also very technical dancer whom I knew would have a tremendous journey ahead of her,” McLaughlin said.

Ever since that performance, McLaughlin said she has seen Lonergan evolve into the performer she is today. “As she has grown at Keene she has found a way to open herself more. She’s actually pretty fearless and much more willing to share that energy,” McLaughlin said.

Another personal highlight for her was participating in “Brangelina” in the fall of 2020, which McLaughlin directed. For her final performance at KSC, Lonergan is showcasing an original work. Her work is an examination of women in history, McLaughlin said.

“Her work always has a colorful liveliness to it and this year is no exception,” McLaughlin said. “After just meeting with her and the costume designer, we are discussing a world where feminine monarchs from past present and future collide.”

Each of the seniors is preparing to move on to life beyond Keene State. Professor of theater and dance Kirstin Riegler expressed confidence in her students.

“They just also, too, need to know that all of them are ready. They might not think they’re ready, but they’re ready to see what’s past Keene State to show the world what they have,” Riegler said. 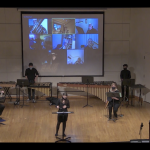