It’s the circle of life. Four years come and go, and before you know it, the seniors everyone knows and loves move on to their endeavors.

While saying goodbye can be tough, there will always be the memories to look back on. Three KSC seniors share all the hard work and dedication they put in throughout their college career.

Jordyn Burke, forward for women’s basketball, who tore her ACL as a first-year at Keene, is a physical embodiment of that dedication. She has pushed herself to work hard and put everything on the court, no matter the pain.

“I tore my ACL freshman year at Keene, and my knees are kind of shot,” explained Burke. “My body is beat up from the last four years.”

When asked if she could go back in time and give herself as a first-year some advice, she would want her to always keep going no matter how gray the future looks.

“Don’t stop pushing when things seem so bleak and so dark,” said Burke. “In one way or another things will get better and everything happens for a reason.”

Although Burke’s playing career may be coming to an end, she doesn’t want to write-off her student career so soon. She plans on getting her master’s degree in biology and says a shot at coaching at Keene may also be on the horizon.

“If I end up taking a grad-year, I’m looking to be a graduate assistant [coach], an assistant coach on the team,” said Burke.

Her dream school to coach at is the University of Connecticut.

Samantha Dickinson, another senior student-athlete, is a captain on the swim team here at Keene. She transferred to Keene from Marist in her sophomore year. Dickinson says she knew Keene was her home all along.

“All through my freshman year I was like ‘Keene was my number one, I should have gone there.’ I just loved everything about it,” said Dickinson. “I love the atmosphere, I love the people that I have met, and my coach [Christopher Woolridge] was just so easy to talk to and he just really wanted me to come.”

Dickinson has thought about maybe coaching one day for her love of the sport. Dickinson says that that future may end up being a reality one day, but for now, it’s just not the right time.

“I would love to give back to people who are in love with sport the same way I am but I just don’t know if I am quite ready to do that yet,” explained Dickinson.

Dickinson is an exercise science major and has aspirations for becoming a Physician’s Assistant, or PA. Until then, she plans on taking a year to find herself and then one day continue her education.

“Right now I’m just planning on taking a gap year, kind of getting my life together a little bit,” said Dickinson.

“Maybe getting that ‘big girl’ job, but hopefully one day go to grad school.”

Returning to the court, it’s pretty hard to not catch James Anozie, center on the men’s basketball team, walking down Appian Way. The 6’6 athlete has dominated inside the paint for the past four years. When asked what some of his best memories are at Keene, winning the Little East Conference championship in 2019 was the first that came to mind.

“My favorite moment was definitely my sophomore year when we ended up winning the L-E-C Championship. That was a big moment,” said Anozie. “Another one of my favorite moments, not too recently, just beating Eastern on a couple free throws. It’s always good to beat Eastern.”

Anozie is feeling pretty confident about the future of KSC Basketball.

“We have a really young core, a lot of talent there,” explained Anozie. “This is pretty much the foundation of Keene State basketball right there. I feel really confident about the team moving forward.”

The men’s basketball team may not have to say goodbye to Anozie so soon. The NCAA is giving an extra year of eligibility to student-athletes who have missed a season of competition due to the COVID-19 pandemic.

“So my plan right now is, it’s likely, but it’s not confirmed, there’s a chance I do come back next season so that’s where I’m heading right now,” said Anozie.

While some senior student-athletes may be leaving, and others may be taking on the world, there’s no denying the memories made will never fade away.

Joe Fletcher can be contacted at:
jfletcher@kscequinox.com 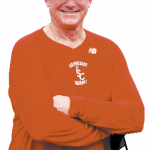 Hanging up the No. 16 jersey Previous
The Owls who stayed in the nest: a look at alumni in... Next