Hanging up the No. 16 jersey 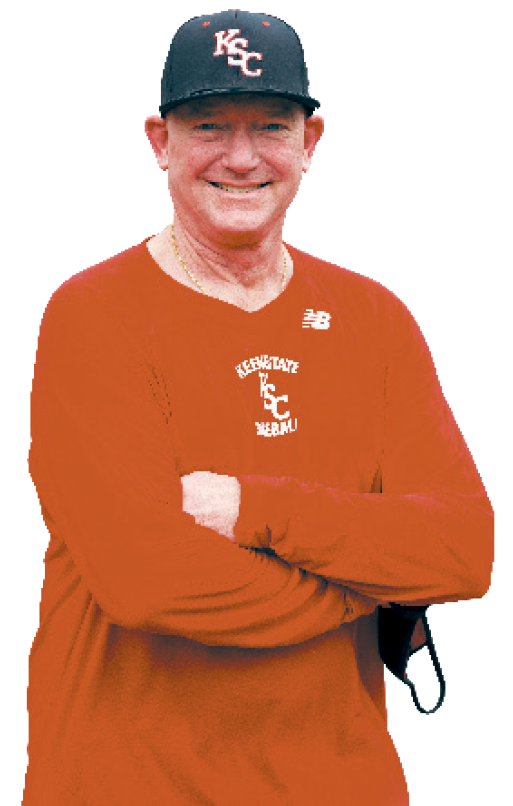 Those are only a few of the successes baseball head coach Ken Howe has experienced in his 33-year coaching career at Keene State, a career that will come to a close at the end of this baseball season.

Howe was hired to help restart Keene State’s baseball program in 1987, having graduated from Keene himself only a year earlier. He worked alongside John Scheinman for 3 years as a co-head coach before taking the reigns himself in 1990. Ever since then, Howe has become a figurehead in New England athletics, the Little East Conference and especially right here in the Keene State athletic department.

“As a person, I don’t think you could find a better one in terms of somebody who you want coaching your kid,” said Abe Osheyack, Keene’s Assistant Athletic Director, who met Howe in his early 20s when he himself was a student at Keene State. “He does things the right way, he’s a great leader, he’s a competitor, you know there was a point in time when Keene State was one of the best programs in New England because of the work he did.”

Osheyack explained that Howe has had nothing but support from the athletic department from the moment he told faculty and staff about his plans to retire.

“It’s been nothing but congratulatory ever since [Howe announced his retirement],” said Osheyack. “He has poured over 30 years of his life into Keene State baseball and his choice to retire is something that’s well deserved and I think there’s a lot of good things in store for him in the future.”

Jacob Laskosky, a junior on the baseball team, explained how he and his teammates reacted to Howe’s announcement.

“When he first told us about a month ago, it was very hard to take because he is a figure in all the older guy’s lives as he was one of the first connections that all of us made when first coming to Keene or even began to look at the school,” said Laskosky. “When he had finished his announcement, instead of sulking and being down, we used this as a rallying cry to try and make his career end on a high note.”

And a very high note is what everyone at Keene State is hoping for. Howe needs only 19-wins in his final season with the Owls in order to become the 30th coach in the history of the NCAA Division III to win 600 games.

That would add one more accolade to Howe’s already impressive list. But according to Howe, it’s all about the memories and the moments shared with all his baseball players over the course of 33 years.

“I wish nothing but the success of Keene State College in general, our athletic program, our baseball team,” continued Howe. “Again, it’s been a joy and a pleasure in all these years and yes I’m going to miss it. But, it’s time.”

Osheyack shared his own fond memories as a close coworker to Howe for the past 7 years with a smile on his face.

“He’s always popping in to say hello,” said Osheyack. “This year because of COVID obviously I haven’t been able to be in the office as much, but when life was normal, he would always pop in my office around 8:30, 9 o’clock, just to say hi, how are you doing. When his team is in season we would just discuss the game they had the night before or two days ago or the game they have that day… that’s probably what I will miss the most. It wasn’t like a scheduled check in or anything he had to do, it was just something that he wanted to do because he valued the working relationship and always enjoyed being around the office.”

“There was one time last year that we spent the first 20 plus minutes of practice going around the entire infield with the sole purpose of picking up rocks,” said Laskosky. “That’s right, rocks.”

After the season comes to a close, the athletic department will begin a nationwide search for Howe’s replacement.

“We will be conducting a full search, I don’t have a definitive timeline on it, but it will be a national search to find the best qualified replacement for the big shoes that are being left behind,” said Osheyack.

A timeline of The History of Howe can be found here.