The Keene State women’s lacrosse team took to the road this past Saturday, February 29, to take on the Wheaton Lyons in the Owls’ season opener.

The Owls were the first to score in the game with first-year midfielder Haile Ratajack sinking one into the back of the goal only 31 seconds into game play.

However, the Lyons, who entered the game with a win already under their belts from earlier in the week, pulled ahead quickly by scoring the next four goals of the game. Three of those goals were scored by senior attack Lilly Callahan.

Keene State fought back with a score from senior midfielder Tess Masci around the 19-minute mark of the first half, but once again Wheaton took off on another scoring streak.

The Owls started off the second half strong with a three-goal scoring streak at the hands of sophomore midfielder Brigid Casey, who scored once, and junior attack Ali Daisy, who scored twice.

Callahan scored once more to put a stop to the Owls’ streak, however, Chareth scored for her second time only a few minutes later.

The Lyons went on to score four more times, while the Owls saw one more score from Ratajack in the second half.

Top scorers for the Owls were Chareth, Masci, Ratajack and Daisy, who all scored twice.

The women’s lacrosse team will have their home opener against Colby-Sawyer on Tuesday, March 10, at 4 p.m. 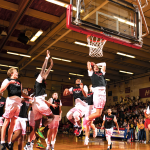