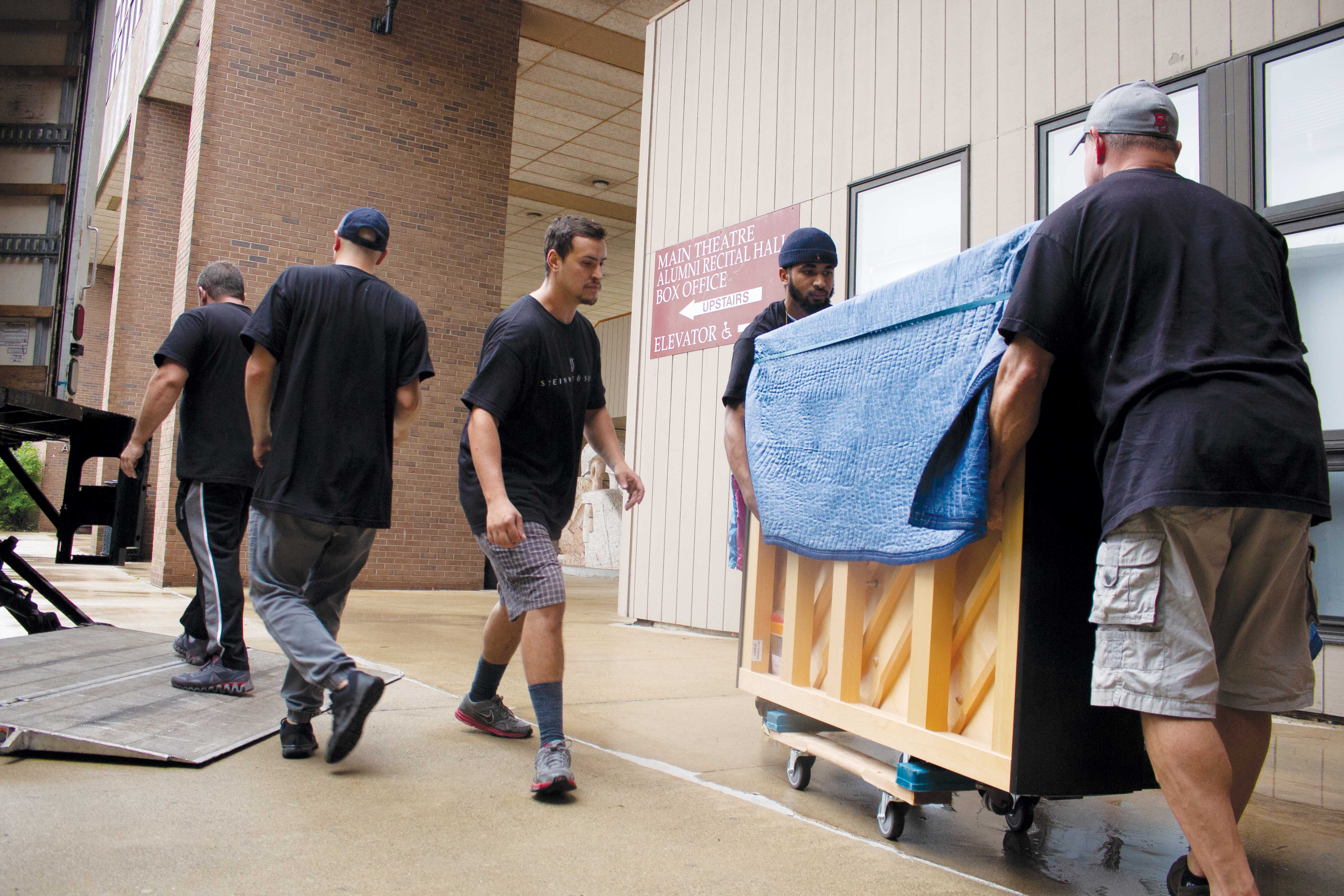 On Tuesday Sept. 18, the Redfern Arts Center welcomed 18 new Steinway pianos. The pianos are coming to KSC from the Tanglewood Music Festival located in Western Massachusetts. The summer festival hosts world renown artists each year through a series of concerts. These concerts include all different types of music such as symphonic, chamber, choral, contemporary, jazz and pop music as well as musical theater.

The excitement in the music department is not only centered around the news that the school is getting 18 new pianos after having some of the old ones for around 90 years according to Assistant Professor Dr. Christina Wright-Ivanova, but around the fact they are Steinway pianos. So, why are these pianos more important than any others? As the music department chair Heather Gilligan says, “The Steinway pianos themselves are just top-notch pianos. You really can’t beat them. They’re handmade. They’re not just processed through a factory. Every single one of them is individual,” Gillian continued. “There are certain aspects of the production process that makes them have a warmed sound or a more consistent action. The strings are the same length as other brands but the tension is adjusted so it creates slightly less pressure on the strings.”

Brendan Murphy, the Vice President of Boston’s Steinert & Sons, worked closely with Steinway and the Redfern Arts Center. They worked to develop a five-year plan to pay off the cost of the pianos, called the Tanglewood Festival Steinway Festival Placement Plan [TFSFPP]. This will make KSC the first all Steinway school in New Hampshire. According to Murphy, “This is year one of the five-year plan to make this school an all Steinway school. There are only 200 worldwide.”

Part of this five-year plan is that KSC is able to purchase the pianos in increments. “The school gets the benefit of all the pianos right away and the school can incrementally purchase them. Which is awesome,” Murphy states.

Gilligan shared part of how this purchasing will work. “For July 2019, Keene State will buy three uprights and one of the Steinway Os, which would account for 20 percent of the inventory. So they will take the pianos away in May and then in September they will bring 14 back since we will have already brought four. And this process repeats until the whole inventory has been purchased,” Gilligan stated.

This idea has been in the making for over a year, and the music department worked closely with Steinway to develop multiple plans that would be best suited for KSC. In May, 2018, the department brought these plans to the administration and KSC Interim President Dr. Melinda Treadwell. “She [Dr. Treadwell] really liked the idea of becoming an all Steinway school because of the connotation of excellence with the brand recognition and the way it will help with our recruiting. It kind of all fell into place when the administration decided to support the project,” Gilligan said.

After administrative approval, logistics came into play, things like how to cover the cost of pianos outside of the TFSFPP. While the payment plan was to cover the replacement of 18 pianos, it did not include the two performance pianos at the Redfern Arts Center. To help with this, the department is in the process of working on a fundraising campaign, which Steinway will be a part of. The total price of all 18 pianos will be over half a million dollars according to Gilligan. The fundraising campaign will aim to reach a million dollars to cover the cost of the 18 pianos, the additional two, as well as maintenance on the instruments.

Over the summer, the contract had to gain support at few different levels. First Keene State College, then it had to be checked by the university system of New Hampshire. “The contract was finalized on August 29. So it’s only a little less than three weeks ago that we found out for sure that it was going to happen,” Gilligan remarked, before explaining the challenges that come with finding a new home for the old pianos in only three weeks, “Immediately we set out to find out whether we would be able to sell or loan out the pianos,” she stated. Currently, the old pianos are being stored in Randall Hall. However, that hall is scheduled to be torn down within the next year, so it’s a temporary solution. The department is in the process of creating a loan agreement to rent out or even sell the pianos to other institutions.

Students will now have the ability to play on these highly regarded pianos. Wright-Ivanova, who also accompanied many recitals last year on the piano, expressed her excitement over the process the school is now entering to become an all Steinway school. “This is in some ways the end and in some ways the beginning of a pretty long journey to beginning an all Steinway school,” Wright-Ivanova said.

As far as how these pianos will better the music program as well as it’s students, the contract signed between Steinway and KSC will be beneficial to the learning happening in the classrooms. According to Gilligan, KSC agreed to uphold a maintenance requirement with Steinway.

The institution is required to get regular tune ups and work done on the pianos more often than they had in the past. By doing this according to Gilligan, the pianos will remain in better condition for students to use and learn from.

The Steinway pianos will also create new possibilities for KSC students Wright-Ivanova explained. “We feel like we have the faculty and the staff and the resources here to make it at the very highest level that the students can have here in Keene, but we didn’t have the instruments themselves so it was really limited itself,” Wright-Ivanova said.

Now with the pianos, according to Wright-Ivanova students will be about to experience and play music on a more professional level.

“A student can only bloom to the level of experience that’s around them. Now a reasonable liberal arts college is producing the same instruments as Carnegie Hall. You can’t get much better than this in the world.”

According to Wright-Ivanova, receiving these Steinway pianos will not only open many doors for students, but hopefully be able to reveal their true potential. “The music is inside every student and if the resources are not able to meet where the musician is at then they can’t realize their full potential. Now the students have the limitless opportunities to shine,” Wright- Ivanova continued. “Every student brings an individual idea, sound, creativity in their hearts to what they’re doing in music. I think having pianos that will match where they are at will inspire them.”

Wright-Ivanova explained that with the Steinway’s, the students now have to tools they need to succeed. “Now it’s up to the student. The door is open. Now we just walk through it,” Wright- Ivanova said.

However, these pianos are not just for music department students. As Wright-Ivanova described, “We really wanted to have an experience for the students that is on par with true excellence of liberal arts colleges.”

These pianos are just the first steps for students on campus to be inspired to reach out and try their hand at the arts according to Wright-Ivanova.

“They will encourage support around the arts department as a whole,” as Wright-Ivanova went on to describe. “I think it comes at a perfect time when Keene State College is really starting and continuing to support the arts in a really meaningful way. We are now poised to become I would venture to say the top music program in New Hampshire if not one of the top now coming into New England.”

According to Wright-Ivanova, music around campus will be encouraged, considering the pianos will not just be placed in the Redfern Arts Center. There will also be two Steinways placed in the Maple Brown Room and Centennial Hall.

As Heather Gilligan says, “It’s not just benefiting the music program. We service over 500 students across campus who take our classes and play in our ensembles and take lessons and those students will have access to the pianos as well. We also have a lot of public events so the community will be exposed to the equipment.”

The whole department encourages students to let their musical side show, as Wright-Ivanova states, “Please come over a check out the instruments, play the instruments, the practice rooms are open, be inspired by these instruments. The doors are always open.”

Lily Ayotte can be coontacted at 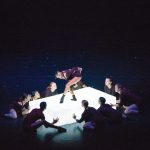