Keene State currently does not have its own track and field facility, but the college has been working to change that.

Back in April of this year, President Treadwell announced that the college was in the early stages of crafting a proposal which would have them invest in creating its own track and field facility. Since then, feasibility estimates were made and a proposal has been drawn up and is currently being considered by the University System of N.H. (USNH) Board of Trustees.

Phil Racicot, the Director of Athletics and Recreation, said that the proposal was mad during the summer, but the circumstances at the time delayed the consideration by the Board of Trustees. “There were concerns coming into the fall semester with increased costs, there’s a significant amount of inflation that we’re surrounded by, so there were some concerns at the Trustee level about how much things might cost this year to keep all the campuses running,” Racicot explained.

Racicot also noted that the college is hoping to hear back from the Board of Trustees by the end of October about the proposal.

“I know President Treadwell and a number of other folks here on campus have worked really hard with the Trustees at the system level to push for campus-wide enhancement investments, [the track facility] being one, so hopefully we will get some word by the end of this month as to the level of investment we’ll see and the timeline that we can expect those investments to roll out, and we’ll obviously plan accordingly,” Racicot said.

An indoor 300-meter track with air-support would be about $8 million, while a standard outdoor track would cost about half of that, according to Racicot.

In regards to location, Racicot said that the ideal location would be at the college’s current outdoor athletic complex on Krif Road. Racicot said that the facility could show improvement among the teams, as well as increase their competitiveness. “Having state-of-the-art facilities on campus means a whole lot, as opposed to, when it comes track season,having to mix-and-match our facilities and having to use some of the local facilities,’’ he said.

He also said he believes the proposed track facility would boost enrollment and student recruitment for the track program.

Dan Roark, head coach of both the cross country and track and field programs, shares in that sentiment. “Having a facility on campus would be awesome and I think that’d increase interest on the high school level,” Roark said.

With the decision by the USNH Board of Trustees expected soon, Roark also said he feels cautiously optimistic about the prospects of the track facility proposal. “I have faith in the other channels that are above me, but until everything is certain…until I get the word, I’m not counting my chickens at this point,” Roark said. 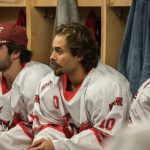 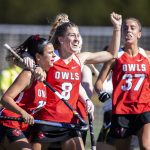