The War on Drugs under former presidents Richard Nixon and Ronald Reagan have had an unfair treatment of Black people. Joe Biden said in a statement, “Sending people to prison for possessing marijuana has upended too many lives and incarcerated people for conduct that many states no longer prohibit […] and while White and Black and Brown people use marijuana at similar rates, Black and brown people have been arrested, prosecuted, and convicted at disproportionate rates.”

I agree that this is a great step in combating the systemic racism that is still in the U.S. This is good for combating racism, however this is not to say that drugs cannot lead to the harm of others.

According to The Sentencing Project, the U.S. State and Federal Prison population was over 1.38 million in 2019. Not only is the U.S. the world’s leader in incarcerations, the Prison Policy Initiative says one in five incarcerated people are in for a drug offense. We should be putting people in prison who are a threat to others, not just a threat to themselves.

According to NPR, Biden drew praise for the order, which tracks a campaign promise to decriminalize cannabis. Decriminalizing cannabis would be a great thing, especially since some states have already legalized recreational cannabis. Regardless if you think that President Biden is doing a good job or not, this pardon is a good thing.

Despite the disagreement over Biden’s pardon, I think that it is a great first step in improving the country. This will certainly help many people who have been previously disadvantaged because of the drug policy in the U.S.

Nico Brazill can be contacted at
nbrazill@kscequinox.com 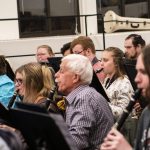