On Saturday, Oct. 15, the Tennessee Volunteers scored an upset win against the Alabama Crimson Tide for the first time since 2006. The Volunteers have been playing against Alabama each year on the third Saturday of October as a tradition.

Following a fourth-quarter field goal, which caused Tennessee to pull ahead and secure the win against Alabama, fireworks were promptly shot off from the Neyland Stadium and fans stormed the field in droves. The grass turf of the stadium was drowned out with orange as Tennessee fans rapidly stormed the field. There were attempts by security to stop the crowd, but they were heavily outnumbered. The fans’ next course of action was to remove the winning- kick goal post from the field. A video posted on social media by Barstool Sports showed a group of fans throwing the goal post into the Tennessee River.

According to Gatorsports writer David Whitley, nobody was seriously injured by any of the events following the Volunteers’ win on Saturday, but there is a discussion to be had about sports culture in the U.S., specifically in football.

For the longest time, football has been a staple in American culture. To many fans of the sport, nothing beats heading to the closest stadium, downing a few overpriced beers and going hog-wild over the team you love. To me, there’s nothing inherently wrong about it. Especially when it comes to the deep south and the great plains states, their college football teams are an important part of life.

With any sport, there are fiercely divided fanbases between rivaling teams. However, sometimes these rivalries can go too far, especially when things like violence get into the equation. Nobody should get hurt or fear getting hurt when going to a sporting event, likely to unwind amid a busy/stressful life; though watching sports can be an emotionally potent event as well, especially during big games.

After over a decade of the Volunteers losing to the Crimson Tide, it’s clear that the Tennessee fans had a lot of pent up emotion from taking loss after loss, and let’s be honest here, a lot of them were most likely intoxicated as well. There’s nothing wrong with celebrating a big win in a big way. Obviously, I’d have preferred if they were just a bit more orderly in their celebration, but most sports fans can empathize with the heat-of-the-moment burst of excitement that Volunteers fans experienced. In the end, the University of Tennessee will probably pay thousands to replace the goal posts, and the fans themselves likely woke up the next day with a bad hangover and are maybe regretting some things they did, but that’s okay in my book. I’d rather “fight” with someone over a disagreement about support for a football team than a disagreement over human rights.

At the end of the day, watching sports at home or in person is a good outlet for many people to express emotions in an over-the-top way, and as long as it doesn’t actively harm someone, then I’m all for it. 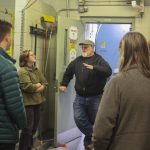