On Oct. 14, two climate activists from the British organization Just Stop Oil threw tomato soup over Vincent Van Gogh’s “Sunflowers” painting in a worthless attempt to draw publicity to their cause.

The right to protest the actions of the government is important to protect and climate change is a very big deal and there should be more action and protests to combat it.

Throwing soup at a Van Gogh painting, however, is certainly not a good way to protest.

If the protestors wanted to have a controversial approach to their protest, they could have done it in a way without damaging historical art. The protestors don’t own the painting and they had no right to ruin it. They could have made their own art and destroyed it to share the same message. Being controversial is fine, but ruining someone else’s artwork, especially when it has nothing to do with climate change, is not the way to do it.

When protestors do things that are intentionally annoying, people are not going to want to be a part of the cause regardless of its purpose. This stunt may have gotten people talking, but a lot of the conversation was about how pointless and baseless the protest was, not climate change. This protest might give those who are on the fence about climate change second thoughts about taking it seriously. A successful protest should get those on the fence to see things in a new light, which can not be done through a publicity stunt like this. There is a huge difference between outrage and annoyance when it comes to protesting. Outrage might actually work in challenging the views that someone holds, while annoyance will only confirm the suspicions of those who are skeptical in the first place. If be successful, you should avoid annoyance or people will avoid you.

Nico Brazill can be contacted at
nbrazill@kscequinox.com 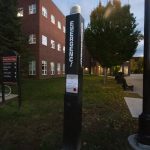