What’s the Book About?

Published in 2017, Karen M. McManus’ “One of Us is Lying” focuses on four high school students: Bronwyn, Cooper, Nate and Addy. The book’s setting is the fictional Bayview High School in Bayview California. One afternoon in a John Hughes type move, all four students go to detention and are joined by their rebel classmate Simon Kelleher. Simon posts secrets about everyone at Bayview High on his blog making him an outcast at the school. This is not an ordinary detention, as while it starts out only slightly suspicious, it ends with Simon’s death.

An investigation into Simon’s murder begins and Bronwyn and the gang are the police’s main suspects. They are soon dubbed ‘The Bayview Four,’ as it becomes known all over social media that they are suspects. More trouble ensues as the murderer continues to post from Simon’s Tumblr blog. This only further implicates the group.

As the investigation continues and more secrets are posted it soon becomes up to Bronwyn, Cooper, Nate and Addy to find the killer and clear their names. Along the journey they get to know each other more with the group becoming friends (with Nate and Bronwyn becoming a couple) and learning to believe in themselves. Slowly they all learn to shed conformity and be true to themselves.

“One of Us is Lying” had me glued to the pages from the start to the conclusion. I found this book to be endlessly suspenseful, brilliant and addicting.

I will give a word of warning for readers of this book: because this book pays tribute to John Hughes movies like “The Breakfast Club,” one should expect the book’s themes to be as heavy as the issues and themes presented in that film. A variety of issues and themes are presented from child abuse, domestic violence and toxic masculinity in relationships and drug addiction. Bipolar depression and alcoholism are also all examined heavily through Nate’s family. These topics are all covered very well. However, know that these topics are all very intense and important, and if they are too intense I would strongly recommend discussing them with someone as one reads the book.

Other themes such as feminism and homophobia are addressed. Every female character in this book provides an example of strong female empowerment in literature.  I will not reveal the character homophobia is addressed through, but I will say they are empowering and show resilience fighting prejudice and learning to embrace the amazing person they are. These characters show how much progression towards inclusivity and empowerment the coming of age genre has undergone.

I love how many connections this book has to coming of age films. As author Karen M. McManus stated in a Q&A, “Yes, that was the original inspiration — The Breakfast Club with a criminal twist. I’ve always been interested in the concept of different types of people being brought together and having to interact with one another, and thought that adding a mystery would raise the stakes in an interesting way,” (Goodreads). McManus follows this statement throughout the book, as “The Breakfast Club” is exactly the vibe a story about a group of teen stereotypes meeting in detention and showly ditching their conformity as they get to know each other feels like. Often times this book feels like “The Breakfast Club” meets “Riverdale” meets “Love, Simon” due to the teen murder mystery and messages of inclusion. This is a great combination as this will draw in more readers for the unique blend of mystery and coming of age.

“One of Us is Lying” is a loving tribute to the mystery and coming of age genre. It has a great writing style utilizing different first person perspectives and strong hooks to keep the reader invested and to better get to know the characters. It also addresses several important themes that further the book’s genres in a progressive direction. If mystery and non-conformity is what you look for in a book then “One of Us Is Lying” is the perfect case for you!

McManus’ writing style is strong. The entire book is written in first person narrative style and divides its perspectives between each member of The Bayview Four. This narrative style gives off a detective investigation vibe, which is perfect for a murder mystery novel. To further this feeling, McManus has each character log the date and time of their entry.  Each section begins like this: “Bronwyn Tuesday, September 25th, 8:50 a.m.”

The opening lines to each section are also well written and incredibly strong. Writers always want to hook readers in with their openings and that’s exactly what McManus does. The opening lines of the book offer a great example, “A sex tape. A pregnancy scare. Two cheating scandals. And that’s just this week’s update. If all you knew of Bayview High was Simon Kelleher’s gossip app, you’d wonder how anyone found time to go to class.” Just from this description, readers will know this book will be non-stop suspense and filled with drama.

In addition, she includes the harm of social media and the media to intensify the mystery. This updates the murder mystery genre to present time as now when someone is subject to rumors or accused of something, the media has the power to publicize that story to everyone. It blends into the harmful effects of cyberbullying and acts as a literary device to make things more tense for the characters.

Author Karen McManus has written many Young Adult (YA) suspense and murder mystery novels, including “Two Can Keep a Secret,” and the sequel to this book, “One of Us Is Next.” McManus is currently working on a third book in the “One of Us is Lying” series that will be released in 2023. 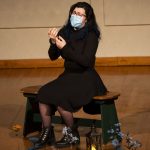 An operatic experience Previous
What's All the Hoot About? | Episode 5 Next 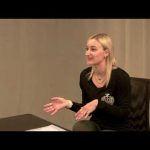