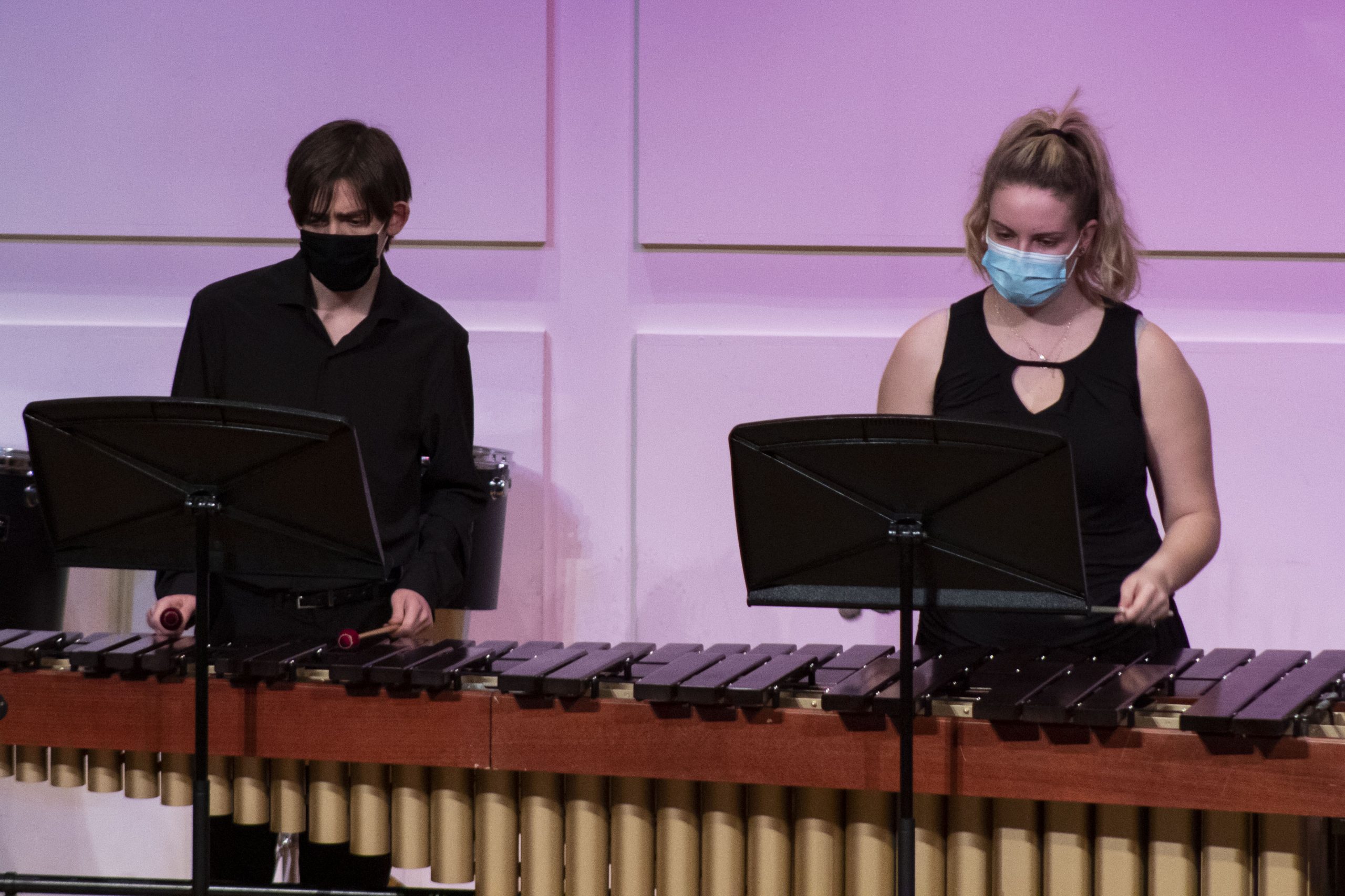 Have you ever had a catchy beat stuck in your head and wondered what instrument was behind it?

The performance included instruments such as the marimba, xylophone, bells and various drums. The group also expanded their performance by playing pieces with heavy influence from other countries.

Director James Walker explained that the ensemble’s repertoire incorporated unique musical stylization, “[The performance] is a chance to hear percussion that you might not hear while listening to the radio,” Walker said. “Muffling the drums, not muffling the drums, stopping the sound… different applications of instruments that even if they’re familiar to you, you might not have heard them played quite [that] way.”

The first piece titled “WAKE for Charles Ives” involved a quartet of drummers. “There are four drummers, each playing one drum,” Walker said. “Those interlocking rhythms start very simply and build up over the course of the piece.”

The second piece, “Trio” composed by Daniel Levitan, showed the variation between different percussion instruments. “This piece has very simple instrumentation: tom-toms, two cowbells and one person simply playing a woodblock,” Walker said. “But it incorporates a number of styles of music… and also reflects Levitan’s personal history studying the music of India and Latin percussion.”

“Percussion Music” composed by Michael Colgrass was the last piece before intermission. “[Colgrass] was one of the first composers for percussion in the classical realm,” Walker mentioned. “… He was inspired by the music of Bach and imagined if Bach were to write for drums.”

Walker added that the first half of the performance was different from the second in terms of the repertoire style. “A lot of the first half was a more traditional, classical percussion ensemble and then the second half incorporat[ed] jazz and some other styles of music as well,” Walker said.

Following intermission, was “Temerina”, an African piece with Latin American influence and “La Bamba”, a traditional Mexican folk song. Both pieces were centered around the marimba.

The ensemble closed the performance with “Old Town” and “Vibe”, both arranged by Walker. “We [closed] with two arrangements by Mike Mainieri…these two pieces are from a band that he’s led.” Walker said.

Walker has been directing Percussion Ensemble since the fall 2021 semester, and appreciates all the hard work the percussionists have put in, “It’s nice to have students who have strong rhythmic senses,” Walker said. “To be able as individuals to pull off being an ensemble.”

Percussionist Garrett Currier described the environment of the ensemble, “It’s a really good dynamic,” Currier said. “… It’s a small enough group where it doesn’t take too long to [know new people] and then grow as a section both personally and musically.”

Currier added that Percussion Ensemble is a unique group. “It’s fun and it is different from the other ensembles,” Currier said. “It’s just different because in a concert band, you have your woodwinds and all that, [but now] there’s just the percussion section.”

Percussionist Cailyn Brochey was unavailable for an interview.