While school was out of session, Keene’s TAD department worked hard planning the upcoming shows for this semester. The preparation included set design, costuming and making sure actors were mentally ready to take on their roles while balancing new classes.

One of the performances coming up this semester includes the annual “Evening of Dance” event, which is set to perform April 14 through 16. This event will include four choreographed pieces, two of which are choreographed by dance professor Cynthia McLaughlin.

“Evening of Dance” stage manager Molly Delaney described the planning that has gone into this performance so far, “What I’ve been doing over winter break is scheduling on 25Live,” Delaney said. “[25Live] is the campus’ event planning [website] and you can book rooms, so I’ve had to book places… just so we can get that all sorted out before rehearsals start.”

Along with booking the rooms, Delaney said they have been in contact with the designers to set up meetings. “We’ll start doing our design meetings… design meetings focus on the concepts and the ideas between designers,” she says.

As the stage manager, Delaney’s job is to help keep each performance on track. “It’s really all about leadership and togetherness,” Delaney said. “The stage manager during the show controls when the lights turn on [and] they’ll dictate when different sounds play… in terms of movement, you really have to pay attention to the dancers or the music.”

Dancer Samantha Parks said she is looking forward to this performance and is ready to work hard to get there. “I am really looking forward to being back in front of a live audience,” Parks said. “Especially with exploring these different concepts, I’m excited to bring it to a live setting and see how audience members take it in.”

Parks will be performing in two of the choreographed pieces, but is also understudying for another. “I’m understudying for [choreographer] Lauren, and her process is interesting,” Parks said. “She is only teaching the dance through an intensive so it’s only going to be two days.”

Kendall Page, the senior dance captain for McLaughlin’s pieces, is looking forward to dancing for McLaughlin again. “Last spring I wasn’t able to be in her piece because of my schedule,” Page said. “I’m most excited about being in that environment with Cynthia like in the past and just being able to dance as much as I can.”

Having this be her fourth year participating in this event, Page mentioned the most intense part of the process, “We have tech rehearsals starting a week prior to the show. It almost feels like we’re on tour performing nonstop for a few days… it’s a lot on the body.”

Before “Evening of Dance”, the theater and dance department will be putting on a production of Shakespeare’s “The Winter’s Tale.” The show is one of the last plays Shakespeare ever wrote and is set to be performed March 2 through 5.

Director Michael Thomas described, “The first half of the play is really deep and personal tragedy, betrayal, misunderstanding, and loss… and the second half is a light-hearted young love comedy with magic, music and jokes.” The two halves connect, leading the characters to experience a resolution.

The cast began their rehearsal process by having a virtual read-through. “I do what we call table work at the beginning of the Shakespeare process where we’re reading through the play closely with the actors working on that scene,” Thomas said. “[This is] to understand what everybody’s saying and get everyone on the same page so that we’re telling the same story.”

Thomas’ stage manager, Jayne Bernardi, said she plays a big part in getting the rehearsal process started. “For the beginning of the process, [I’m] mainly being the communicator between a lot of different designers, planning and scheduling meetings and working on templates for notes that we take during the process,” Bernardi said.

Bernardi also mentioned that the process includes concept meetings. “Before the show even starts, we start with concept meetings,” Bernardi said. “We are meeting with designers and the director to [get ideas for set]… over winter break we spent a lot of time with a bunch of different designers.”

Bernardi had to be the communication between the actors and costume designers. “We got measurements for actors,” Bernardi said. “As well as notes about noticeable things on their body, so if you have tattoos or glasses we want all of that communicated to the costume department.”

Bernardi said she is looking forward to tech week and what this semester brings for the department. “I’m excited to challenge myself with this,” Bernardi said.

Bernardi also mentioned that having more crew would be helpful. “We always manage to make things work, even if we don’t have our ideal crew application,” she said. “But it can get a little more complicated the less people we have.”

To be a part of the crew for “The Winter’s Tale,” contact Technical Director Craig Lindsay at clindsay@keene.edu. 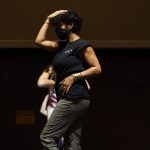