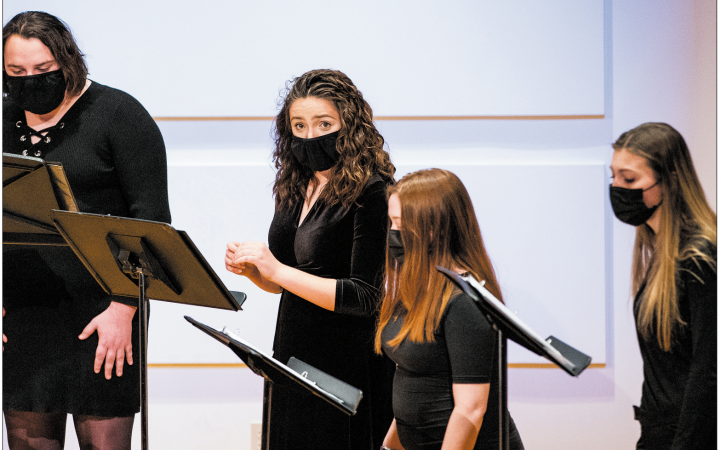 Members of the KSC Vocal Consort performing in their first performance of the year on Monday, November 29 in the Alumni Recital Hall.

Vocal Consort is a small, auditioned ensemble consisting of eight singers with one or two per voice part. Their repertoire focuses on music from the medieval and baroque periods with each member being responsible for their leadership and contribution to the group.

Morgan Bothwell, the director of Vocal Consort, began directing the group this semester and was excited to perform. “It [was] really great to have a live audience in person and to be able to share what we really love with them,” Bothwell said. The group went into the performance incredibly excited to get back to what they do best.

The set opened with “Lágrimas de mi consuelo,” a piece involving intense layering and balance between the singers. Kyle Trombley, the bass of the group, said he loved this piece especially because of his part. “The bass part is the pedal, it’s really cool because you have this contrary motion [and then] have this pedal going on underneath it,” Trombley said.

In contrast, “Lágrimas de mi consuelo II,” was a more difficult piece to perform but had a beautiful flow. “It [was] like a waterfall, everything trickle[d] on itself… like waves,” Trombley said. Since this piece was more intricate, it required the group to think more about imagery. “We played around with imagery a lot,“ Trombley said. “Thinking of this piece as opening the gates…I wrote that in my score, and it’s still [there].”

The group also sang “Oculi Mei,” which is a polyphonic piece, meaning that two or more melodic lines were sung simultaneously. The solos within this piece showcased individual members’ talents and their ability to hold their own as a singer. “It takes a lot of thought and focus with the people around you to be able to do these harmonies,” Bothwell said. “And in general to be able to line up and make a really cohesive sound.”

The final two pieces “Happy We!” and “Wretched Lovers” are based on the Greek myth “Acis and Galatea.” In the myth, the musician Acis falls in love with a nymph named Galatea, angering the god Polyphemus. “Happy We!” portrays the moment where Acis and Galatea confess their love for each other and is a more uplifting piece. “It was so much fun to put together once we got it under our belts,” member Hattie Skvorak said, “It was very much a labor of love, but worth it in every sense.”

“Wretched Lovers” portrayed the moment where Polyphemus plans his revenge on the two lovers. “I found [this piece] difficult because of its structure,” Trombley said. “It had some parts that would [conflict] with other parts, or not be in sync.”

Despite the difficulty of this piece, the group enjoyed performing it. “There’s something to be said about putting that amount of work and love into something,” Skvorak said. “It allowed us to make some really great connections and we really bonded over it.”

As a new director, Bothwell said he appreciates all the hard work these students put in this semester. “They’ve really been a light for me this semester…they’re doing such a great job communicating with each other through gesture and breath and really making it about musicianship,” Bothwell said.

He also emphasized the importance of dynamics and phrasing and was impressed that the students picked up on these skills very quickly. “Every single one of these members surpassed my expectations, and they’ve been an absolute joy to work with,” Bothwell mentioned.

As a senior, Skvorak said she appreciates the close-knit connection she has felt over the years. “I think the best way to describe the atmosphere of the group is collaboration,” Skvorak said. “This group is the essence of collaborative music, [the] small group and one part singing really holds a special place in my heart.”

Similarly, Trombley said he appreciates everything this small ensemble has given him, “I’d say the impact is really heavy because I had never been exposed to that music before…it inspired me to learn more about that,” he said.

Trombley also loves being a part of this ensemble because he gets to know each member as a musician and as a person. “We really know each other in the sense that we’re able to interpret the lines together as a group, and really make the music come to life,” Trombley said.

Vocal Consort welcomes anyone interested in this style of music or anyone looking to improve their musical skills, to audition for the ensemble. “I think of [the group] like a quilt of sorts, each square is beautiful and unique in it’s own way,” Skvorak said. ”When you put them together, it combines to create something really engaging and it’s more beautiful and exquisite than you can ever imagine.” 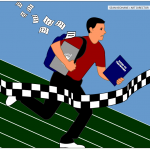