Claudia Peña Salinas, one of the artists behind Professor Emily Lambert’s new exhibit, “Modernizing the Landscape,” presented her artwork on Friday, November 19 at the Thorne Art Gallery.

Salinas opened the presentation by showing slides of her installations, which were all based on the two Aztec water deities Chalchiuhtlicue and Tlaloc. The sculptures themselves incorporated the culture through elements of nature, space, symbols and images.

Salinas used brass for a lot of the sculptures. “I find brass to be a very easy material to work with… I want these sculptures to occupy space,” Salinas said. The purpose of the installations were for them to be a space for viewers to walk through and reflect upon the art and culture.

Salinas’ presentation featured some of her thread pieces, which hung from the ceiling and had materials attached to the bottom. “The thread is not a design element, it’s like a functional element,” Salinas said. The thread used in her sculptures also represented Indigenous cultures and related to textile making.

Salinas also presented five minutes of a video, which focused on the water crisis in Mexico City, and related it back to the water deities and their influence on the culture. The video took four years to film and had footage from her travels to Mexico. The video also featured water sounds, ancient symbols, and hidden figures of the water deities. “When I have a video with my installation it gives more info on what I’m looking at and my sculptures, because they’re very minimal, “ Salinas mentioned.

Curator Emily Lambert, who has known Salinas since their time in grad school, expressed how much she appreciated Salinas’ stylistic approach, “I am fascinated by the way Claudia has moved her painting practice from the studio, out into the world… she’s able to come to a subject matter and then build a world of relationships between objects and history,” Lambert said.

Art students Rachel Boudreau and Liam Frey attended Salinas’ presentation and found her art style different but interesting. “It was quite refreshing to see ancient images in a more modern way,” Frey said.

Similarly, Boudreau enjoyed the cultural background of the pieces. “I think the most interesting part for me was the history and the mytholog[ical] side of it, because… [Aztec culture] is very underrepresented…so that was really interesting to see how that kind of cultural aspect,” Boudreau said.

Salinas has a very conceptual art style which leads viewers to reflect more upon the message behind it. “Our understanding of [art and style] is changing and [that] impacts our understanding of history and culture,” Lambert said.

Salinas is currently spending five weeks at the MacDowell artist residency in Peterborough, NH. She is working on another video installation titled “Be Water”, which will be shown at the Contemporary Art Center in Cincinnati, Ohio.

On December 9 at 4 p.m. there will be a student exhibition at the Carroll House on Main Street. There will also be a faculty exhibition in early February. 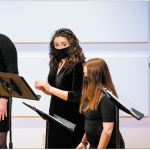 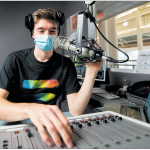