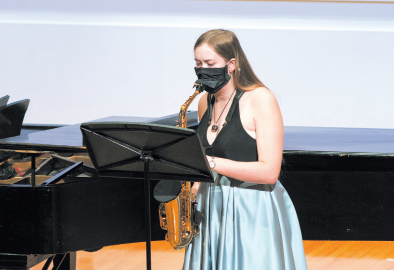 For her senior recital, Fifield performed saxophone repertoire which she has been preparing over the past four years. Her applied music professor, Dr. Craig Sylvern, has been instructing her throughout her time at Keene State, and describes the work that went into the senior recital.

“She’s been learning repertoire and learning technical skills and how to interpret music,” Sylvern said.

Sylvern had some requirements of his own with the repertoire, but still collaborated with Fifield to make the perfect set of music. “We picked out something that [was] gonna be an interesting program,” Sylvern mentioned, “Something with variety to it that also meets the criteria [of] any music student.”

Choosing the order of the pieces was another task Fifield and Sylvern had to collaborate on. “With any performance, there’s gonna be a little bit of performance anxiety,” Sylvern explained, “So typically for the first piece you want to pick something you’re most comfortable with, that way you can kinda relax and kinda get into it.” Fifield opened the recital with pieces from Sonata No.3, which immediately opened the audience’s eyes to her hardwork and talent.

“[Also] there’s usually a piece or two that requires a little bit more endurance than the other ones,” Sylvern mentioned. “You don’t wanna put that last because then they’re all out of juice and it doesn’t wind up to be a great performance.” Given that, they both agreed to have the most technically challenging pieces third in the performance.

Another factor that went into the senior recital was the audience perspective. “[We] want to have a little variety for the listener so that way, the listener [doesn’t] zone out,” Sylvern said. The mix of fast and slow paced songs within Fifield’s performance enhanced the experience for the audience and was also beneficial for Fifield herself.

“Claire has grown a tremendous amount over the past four years,” Sylvern said.

Like most music students, Fifield came in not very experienced with advanced repertoire so she had to put a lot of work in to feel comfortable performing it on a concert stage. Sylvern said he is tremendously proud of her progress and that she’s playing pieces at such a high level with high accuracy. “[This recital] is a really nice combination of all that work she’s put in, so I’m really proud of the progress that she’s made in her level of performance,” he added.

In the crowd, music student Laura Sandman was in awe of Fifield’s conclusion to her recital. For her last piece, she used a device called a looper which allowed her to record and loop the measures she was playing in front of the audience.

“I loved the way Claire was able to incorporate technology in her last piece, [since] it’s not usual to see that in performances,” Sandman said.

Miles Johnstone, a first-year saxophone player majoring in music education, attended the recital and said he relates to Fifield’s experience. He describes the music major experience to be, “Extremely busy, difficult, and a lot of work.”

Even though it is a lot of work, Johnstone says he really enjoys it and that it has been a rewarding experience so far. Sandman and Johnstone are both looking forward to their senior recitals and look up to Fifield’s hard work and progress.

Fifield was unavailable for an interview. 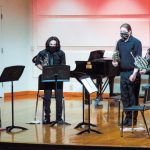 Bring on the brass Previous
Concert Band returns Next 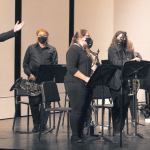