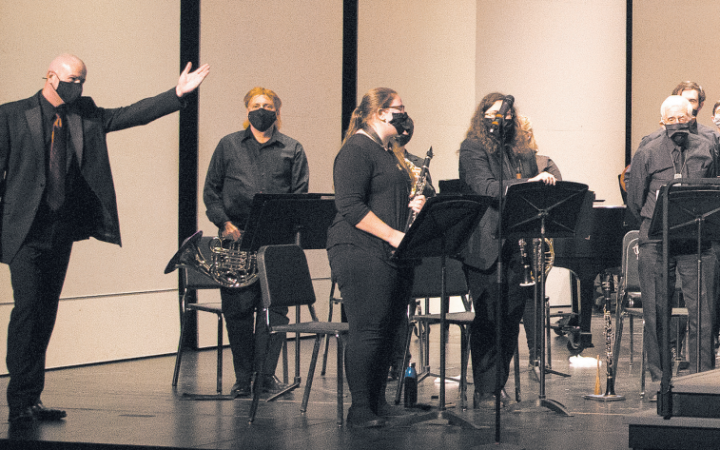 In February 2020, the Keene State College Concert Band would hold its last in-person performance with a live audience.

The first performance with a live audience in-person was held on November 4 with conductor Dr. John Hart.

According to the program, “This program was largely organized around the sheer joy we feel at being able to make music together in front of a live audience.”

During the performance, Hart noted that a big part of the night’s selections were based around the idea of representation. “50% of this program is composed by women, BIPOC or LGBTQ+ composers. Representation on concert programs is just the first step in righting the many injustices facing marginalized composers,” the program noted.

The program also noted, “The eclecticism of this program— we explore music ranging from American folksong to Russian dissidence, traditional through the most avantgarde—is an attempt to reconnect with as large a variety of music as possible after enduring over twenty months of pandemic.”

The performance opened with “Rocketship!” by Kevin Day, “an intense and vibrant concert opener that highlights the rhythmic energy and vitality present in each section of the ensemble,” the program said.

Next, the concert band played “One Life Beautiful” by Julie Giroux. Hart shared that he’s played this piece twice before, once before he had a daughter, and once after. The score noted that the piece was commissioned by Ray and Molly Cramer in memory of Heather Cramer Reu.

“Lichtweg/Lightway” was performed next. Hart noted that the piece was inspired by a light fixture that the composer, Jennifer Jolley, saw at an airport.

After a 15-minute intermission, the second part began with “Bugler’s Holiday” by Leroy Anderson, which featured a trumpet trio composed of Michael Vlachos, Andrew Doubleday and Thomas Randall.

Following “The Seal Lullaby,” conducted by student Madison Gubata, the concert band played “Shenandoah,” arranged by Omar Thomas. “This arrangement recalls the beauty of Shenandoah Valley, not bathed in golden sunlight, but blanketed by low-hanging clouds and experiencing intermittent periods of heavy rainfall,” a program note by the composer said. Members of the concert band recreated the sounds of rainfall by snapping their fingers lightly.

The performance ended on a bleak note with Sally Lamb’s “High Water Rising,” a piece about the rising sea levels due to the polar ice caps. “The piece was originally inspired by David Shumate’s poem High Water Mark (2004). The depiction of a great flood, the water rising to record heights, all manner of things being carried away with the current, and the indelible impression such an event leaves on those who live through it, got me thinking musically,” a program note from the composer said.

Regarding playing in the concert, first-year Chase Broadway said, “For the most part I felt pretty stressed but I usually feel stressed when I’m performing with something like that.”

First-year Sebastian Swartout said, “[I’m] proud that I did well and proud of everyone I played with.” 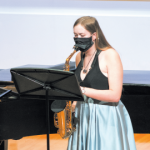 Finale for Fifield Previous
A look at the landscapes Next 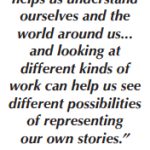