Following whole-sale alignment this past summer, the college placed a number of majors on administrative hold including women and gender studies. This means that incoming first years to the Fall 2022 semester will not be able to register for the program.

KSC WGS chair Dr. Patricia Pedroza Gonzalez said she was disappointed by the news. She thinks it sends the wrong message to the community.

KSC junior and WGS major Tess Hubbard said she is upset by the college’s decision. She feels the major is a strong asset of the college.

“A lot of people have this perception that we don’t need these women classes,” Hubbard said. “But I think they’re so important because detrimental things are still happening to women all over that need to be discussed. I think these classes are important for men, women, non-binary people to take and to just shut it down would be harmful to students.”

KSC President Melinda Treadwell said the reasoning behind the decision is that the WGS program did not have enough students enrolled in the major to justify the cost. By eliminating the major, the school will also eventually be eliminating upper level courses that were previously required for majors in the program. Although several upper level courses will be cut, the college will still maintain the WGS minor and faculty as well.

University of New Hampshire Women and Gender Studies chair Dr. Siobhan Senier said she is confused and disappointed by Keene State’s decision to cut their major. In her more than 20 years working in the University System of New Hampshire, Senier said the viability of a program was traditionally based on the number of students enrolled in classes for a program, not by the number of students enrolled in a major. She added qomen’s and gender studies is an important perspective to teach, especially to college students.

“You are all crunched on a college campus where things like sexual harassment and sexual violence have not gone away and gender discrimination affecting all genders has not gone away,” Senier said. “We need the university system to be thinking critically about gender and power and how that’s operating.”

Although it’s “better than nothing” that Keene State will continue to offer a minor and lower level courses for WGS, Senier said upper level courses provide students with critical knowledge needed to pursue a higher level of education in that field.

The women’s and gender studies department at UNH is advising roughly 80 students as majors for the program and 160 students as minors. This is compared to the seven students enrolled in the major at Keene State. Senier said she thinks seven is a respectable number of majors for Keene with a student population size roughly a fifth of UNH.

Dr. Pedroza Gonzalez said the value of the Women and Gender Studies major is not reflected by its numbers.

“We are not about numbers, we are about critical thinkers and about activism,” Pedroza Gonzales said.

Pedroza Gonzalez also added she thinks that the college placing the program on “administrative hold” isn’t reflective of what is actually happening.

“Hold is just the first step to being eliminated,” Pedroza-Gonzalez said. She added that she can no longer promote the major to prospective students during open houses. “I need to say ‘no you cannot enroll in this major.’ I need to tell you ‘sorry, you’re interested in this program you need to go to another place. You cannot be enrolled here for this program.’”

When the decision was reached in July to put the program on hold, Treadwell said it was communicated to all applicable faculty and students who expressed interest in the program or enrolling in the major. Students had until September 3 to declare WGS as their major.

Keene State junior and WGS major Victoria Bosse said the administration did not notify her nor her peers that the major would be cut. They found out through WGS faculty. Although she had already taken eight courses in the program, she had not declared her major until just weeks ago. Bosse went to the registrar’s office and was told they couldn’t enroll any new students.

“I was scared,” Bosse said. “They eventually granted that I could declare it as my major but for a solid two days I was very nervous about whether or not I could get into that major.”

Hubbard added that the announcement was abrupt and she would have liked to have been told sooner. “I think if it was a male-dominated major they would have put more emphasis on letting students know,” Hubbard said.

Treadwell said the school would extend the deadline to declare the major those who were interested, given that the decision was “such a disruption.”

President Treadwell said the college hopes to merge the women and gender studies courses and minor with the school’s anti-racism major in order to create a multi-disciplinary approach to race, to othering and social justice. She added the program will talk about facts, and address contemporary issues as well as those of history.

“We’re gonna have an anti-racism major in a state that says we’re not supposed to talk about race,” Treadwell said. “I think that’s pretty damn brave.” 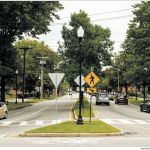