Inspired by the curiosity of Keene State College Archivist and Curator of the Orang Asli Archive Rodney Obien, the series talks about the modern day Orang Asli lives. The series has a total of three conversations.

Orang Asli is a collective term (which means original or first peoples in Malay) for some 18 ethnic groups of less than 150,000 in total who are widely regarded as comprising peninsular Malaysia’s original inhabitants (in the sense that they pre-date the arrival of Malays), according to minorityrights.org.

Obien invited the project director and co-founder of the Gerimis Art project, Wendi Sia, for the conversation. The website of the Gerimis Art project describes the project as “a collaborative art project and archiving initiative that explores Orang Asli (indigenous) narratives from the Malaysian Peninsula.” According to the website, Sia is a full-time copywriter and has been professionally writing for five years.

Sia explained, “[Gerimis Art Project] is neither an NGO or social enterprise, it is purely an art project, which we (Sia and her friend) started. Basically, what we do is that we co-create content with Orang Asli artisans and contemporary artists. So, we work with communities, or established artists who are actually already leading their own efforts in recognizing, restoring and preserving their own arts and culture.”

Sia’s friend Sebastian Heng is the co-founder of the project. According to the Germis Art project’s website, Heng is a full-time illustrator and has five years of experience in the entertainment industry.

Sia explained that the inspiration to initiate the art project came when Heng and Sia went on a hike in a forest in Puchong, Selangor in Malaysia. She described, “We went to an area… [and] we were stopped by the police… We were told that the whole area used to be Orang Asli land before they were [forced out]. The whole area was turned into a research area for a university. So I was surprised because I lived close to the area for, like, over 10 years and I did not know of such a thing. And then I wanted to just explore like where else, in the neighborhood that Orang Asli were moved from their homes [and had to] dispossess their land. He (Heng) is an illustrator, and I’m a writer. We thought the best way to actually explore this and to talk about this is to bring awareness and to educate the public through an art project. So that’s how we were inspired.”

Obien asked Sia to explain about the zines they produce, “The Germis Art project, in addition to working with the various communities, they produce these wonderful publications, and most recently, zines.”

Sia went on explaining about a particular zine called, “Mad Weave.” The website explains ‘Mad Weave’ as a book about a Master Weaver, the dying forests, and how weaving is a reminder of the past to secure the future.

Sia said the story is about two weavers who they met “to learn about who the makers [were] behind the crafts.” Sia added, “Because every craft [has] a story to tell… Throughout knowing them in the last few years, and they shared a lot of stories, especially about their path, and also about the surroundings where they live.”

Talking with the weavers helped the project team see how the crafts evolved over time. “40 years back, the crafts were very different from the crafts that they have today in the village because their way of life also evolved. [Now], forests [have] changed into palm oil plantations, and then much of the land was turned [for] sand mining, then into water reservoirs. And then the craft also sort of evolved alongside,” said Sia.

As an archivist Obien expressed his curiosity about the motivation behind archiving that Sia and her team does.

Sia explained that she wanted to document about Orang Asli art to make it easier for people who are looking for similar information. She talked about her own struggles while starting this project, “It doesn’t appear on the media a lot… we don’t hear much about it and how rich their culture is. When I started this project, I found it very difficult to get resources, I had to look at many different places.”

She also said that archiving Orang Asli culture was a way for her to explore the intimate relationship between the ethnic groups and the land. She said, “Of course! They live off the land and depend on the land a lot. But it goes beyond just that, that they are very close. They have a really close relationship to the land.”

Sia said, “The kindness that I have received, and the warmth that we have received from our Orang Asli friends is what really keeps me going. I appreciate it a lot.” Sia believes that the work of the project is impactful, as they are “bringing [Orang Asli] stories out, and [Orang Asli community] is happy about it.” She explained, “It’s not something that everyone could easily find in a bookstore.”

Sia shared that she further wants to translate the books in either Malaysian or one of the Orang Asli languages. The books they produce are written in English.

Obien asked Sia what the art project’s short-term and long-term goals were.

In response, Sia said that the short term goal is to do events together and have fun while doing it. She added, “…just to encourage more creation of works from the artists themselves and just to keep each other going.”

For the long-term goal, Sia is looking for three stages. She elaborated that the first stage “would be educating or, sharing the stories that [they] collected”, then, the second stage would be “creating a community”, and the third stage would be “collective action”. She added, “So when the time comes, for example, in the communities that we work with, when their land is being threatened, or if any disasters happen and help is needed, then we know that we have this group of people who are ready to step up, and support the work that we do.”

With that, Obien wrapped up the show and announced that the last talk of the series will be next month on May 27 at 8 a.m. Eastern Time and at 9 p.m. Malaysian Standard Time with DJ Vicky Eluq. The talk will be live streamed on the Facebook page of Orang Asli Archive.

Keene State College has been documenting, preserving the history and culture of Orang Asli since 2000 with the help of a grant from the Warner Grant Foundation. The series was presented by the Orang Asli Archive, Keene State College, and the Centre for Indigenous Studies, University of Malaya. 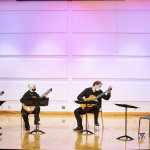