On May 19, the Keene State College Jazz Ensemble performed in front of the Redfern Arts Center.

The night started off with the ensemble playing the piece “Norwegian Wood” written by John Lennon and arranged by Bill Holman, which was promptly followed by “Riffin’ at the Ritz” by Benny Goodman and translated by Myles Collins. The director of the Jazz Ensemble, Steven Cady has been “Learning and performing jazz since his childhood,” according to the concert program. According to Cady, the reason why he decided to choose the pieces played was to “offer material that’s going to stay engaging and informational and exciting and fun for the audience because if the audience doesn’t like it, then it doesn’t stick with them”.

A huge aspect of putting the event together is choosing the pieces that would be played during the performance. “One of the questions of what material is appropriate for the students or the band itself is if it’s an academic setting, you have to choose material that represents an appropriate and achievable challenge to the ensemble,” Cady said.

One of the musicians that played in the May 19th Jazz Ensemble was first-year music education major Stephanie Aubin. Aubin was the first tenor saxophone chair, Aubin said she has been playing tenor saxophone “off and on for around 13 years.” Aubin described her playing as “challenging but worth it. Learning any instrument is difficult but with time it can be a lot of fun.”

Aubin’s personal favorite piece from the performance was “Paranoid Android” by Radiohead because of “the rhythm section break being so much fun to listen to.”

The May 19th performance was Aubin’s first time being a part of Keene State’s Jazz Ensemble. “Playing in the ensemble was a lot of fun. Between Steve being an amazing conductor and the band as a whole putting a lot of work into making it happen, I couldn’t have asked for a better first experience with the school’s jazz band. The experience was amazing and I loved performing with them,” Aubin said. 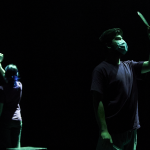 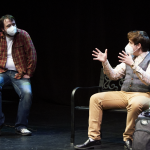