The performance was held on May 8 and allowed audience members to tune in to Bridge’s performance through a pre-recorded livestream. Bridges opened up his performance by playing “Four Short Pieces” by Howard Ferguson.

According to the event program, this piece is reminiscent of celtic folk music but it “truly has its own style, one that takes into account the clarinet’s unique tone and makes good use of it. Each movement is very different from the last, and each explores a different texture in the clarinet and piano.”

Following “Four Short Pieces” was “Fantasy for Clarinet,” composed by Malcolm Arnold. “It’s a fun piece moving between moods light and dark,” Bridges said. The event program stated that this piece is free in form and musically original in inspiration, exploring the capabilities of the clarinet at every level.

“It opens with a proud, melodramatic theme that is then mimicked quietly,” The program stated. “It moves on to a rhythmic sequence that wraps around itself and launches into a heated alternation of high and low notes, with a sense of urgency that continues until the piece’s slow, dark ending.With an exciting rhythmic flow, an opening melody that’s likely to get stuck in your head, and dramatic juxtapositions of mood and pacing, this is a clarinet solo that’s truly a joy to play and to listen to.”

Bridges’ third performance of the night was “Café 1930,” the second movement of “Histoire du Tango,” composed by Astor Piazzolla. Bridges was assisted by fellow KSC music student Alyssa Becker, whom Bridges thanked for her work.

The program writes that this movement conveys a slower pace alongside a romantic, somber mood. “There are spaces for both players to interpret the tempo with creative freedom, adding complexity and drawing in the listener. The form moves on to an exciting accelerando section, and a brief shift to a beautifully contrasting major key, before its return to melancholy.”

Bridges’ final performance of the night was “Introduction, Theme, and Variations” composed by Gioachino Rossini. The event program stated that Rossini’s piece takes advantage of the full range of the clarinet, showing off its speed and flexibility to create bridges from one melody to the next.

Prior to his clarinet performance for the piece, Bridges told the audience how learning to play this piece furthered his ability to play the clarinet.

“I remember playing the intro to this in the summer,” Bridges said. “At first I thought a high A was the highest note on a page, but then I found out that the highest is a high G. I love a piece that drives me to be a better player.” 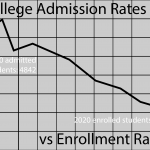 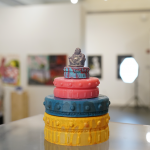