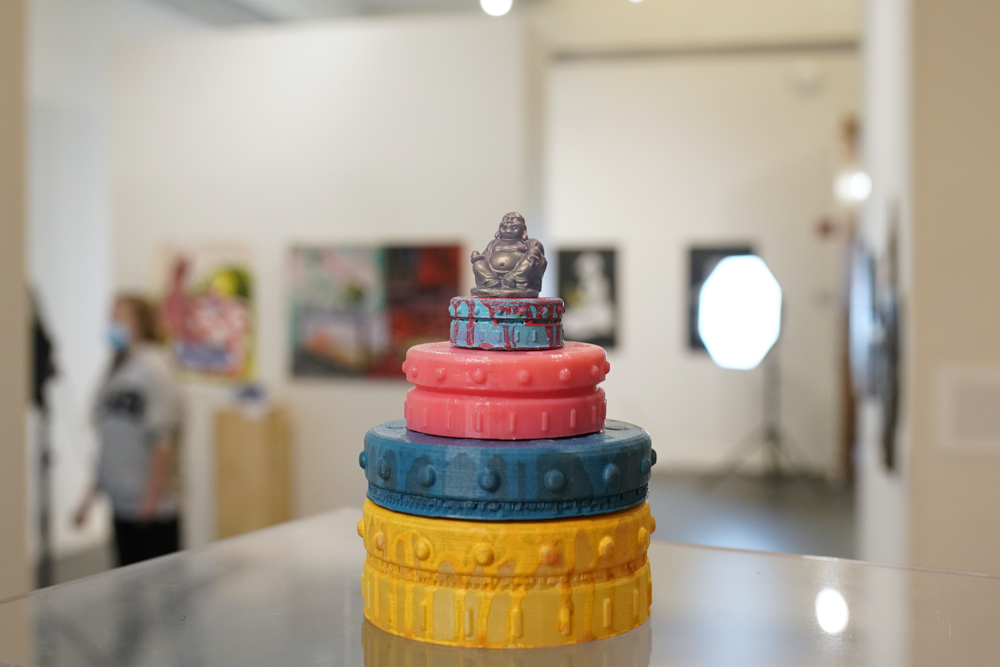 Studio art students showcased the semester’s work at the Throne-Sagendorph Art Gallery on campus as part of their senior seminar class.

The show featured 29 student artists working in various mediums. Painting, sculpture, photography, pen-and-paper, ceramics and printmaking were all showcased. Senior Ivy Hill had her 11-strong series “The People of My Mind” featured.

Hill’s pieces, which all consist of pen and ink drawings and acrylic paint on a 40”x26” canvas, feature warping of the human body. One piece, titled “Tongue Tied,” features two malformed grey figures with pale green tongues knotted between them. Hill said that the discomfort one may feel when looking at such pieces is intentional.

“I like using parts of the body in my art. Like tongues, feet, genitalia, stuff that makes people uncomfortable. I like people’s reactions; I find it interesting. I’ve always had a weird, twisted, dark mind and I like to release that into the weird creatures that I draw,” she said.

Hill said her art has a message beyond the discomfort. As someone who has struggled with body image in the past, Hill said she wants to allow people an escape from reality by experiencing her artwork.

As on-campus restrictions tightened in light of high COVID-19 positive test rates, the show was able to open safely and as planned. Parents and family, however, were not allowed on campus to view the show. A livestream was offered later that night for anyone unable to attend. Professor Lynn Richardson, who teaches this senior seminar class, said she recognized how disappointing that can be for students.

“At least the parents can see it through livestream, to see the culmination of their years at Keene State. I know they’re frustrated that the public can’t come see the show,” Richardson said.

Despite those restrictions, Richardson said the show went well with a great on-campus turnout. Parents were able to type in during the livestream to request certain pieces be zoomed in on, and to listen to interviews with the student artists.

The livestream recording is available on the Thorne-Sagendorph Facebook page.

Thorne-Sagendorph Faculty Coordinator Professor Paul McMullan said he was excited to see the show happen in-person. Artwork often loses something when you are unable to see it in person, he said.

“Especially with three-dimensional work,” McMullan said, “you can walk around it and experience it in relation to your body. It’s not just a screen.”

One reason the Thorne-Sagendorph Art Gallery was able to acclimate to the COVID-19 protocols was its use as a learning space during the past two semesters. Half of the building has been in use as classroom space due to the pandemic, meaning the area had already been properly set up to social distance, said McMullan. He said he hopes the space’s use as a learning area will help encourage students to learn more skills as artists, such as curating and hanging art. An important aspect of an art show is the piece’s relationships to one another, said Richardson. This year’s show, for example, has a fantastical element, according to her.

“When you walk into the gallery, it’s not just one student’s work, it’s all of them,” she said. “This is what everyone’s thinking in 2021.”

No other students responded to multiple requests to interview. 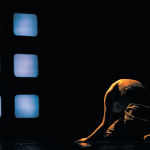