The top performers for the women’s team were as follows:

For the men’s team, the top performers were as follows:

Sophomore distance runner Jacob Pearl placed first in the 800-meter run with a time of 1:59.43.

Junior thrower Joey Fodor placed first in javelin with a throw of 58.27-meters.

The next meet for the Owls will be the Little East Conference Championship meet in North Dartmouth, Massachusetts, on May 2. 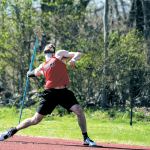