Art can be a tricky thing to pin down; some people say it’s any form of expression while others are a bit more particular about what they consider art to be.

With increased graffiti around the Keene State campus, that has come into question as well. This news came in the form of an email from Campus Safety on April 21 talking about them looking into increased tagging all around campus. Personally, I believe that this graffiti can certainly be considered art, but I think if they don’t want it to just get washed off, there should be some kind of meaningful message behind it.

I haven’t seen very much of this graffiti, but from what I’ve seen, a lot of the graffiti around campus is very basic and seems to be more about being edgy than the spirit of rebellion that most of graffiti is about. An example of this is many of the ones I’ve seen that are essentially just spray-painted words.

On the other side of this, I’ve seen some very cool looking designs that I think should be kept up and add character to the “canvas” that they may lay on. One of these that I’m talking about is on a bus stop bench that otherwise would just be a boring, old piece of glass. This also brings me to my next point that people should also know their audience and think about the placement of the graffiti.

When it comes to academic buildings, residence halls and other important buildings, I think people should be significantly more careful. These buildings should be absolutely preserved as they give our campus its primary image. If somebody was to attempt tagging one of these buildings, however, they better have something of great importance to say that will be of benefit to the overall community to go along with the aforementioned true spirit of graffiti.

From the school’s perspective, I can definitely understand why they are trying to put a stop to people doing this. They have an image to preserve and when they are in admissions and tours season, especially with the Class of 2025 beginning to take shape, they want the campus to look as good as possible. Another part of this is setting a good culture for the campus and if that’s something a potential student isn’t comfortable with, they may also begin to question the ability of the school to make it stop.

Overall, I do think much of the graffiti art around campus is harmless because it’s not like somebody is putting it on the president’s house or newer residence halls, but I can see why the school is trying to put a stop to it. They have a reputation to uphold and especially if it isn’t of any true artistic value, unfortunately, it just messes with the image of the school.

Needs and necessities: on sale now! Previous
Setting a sustainable example for colleges Next 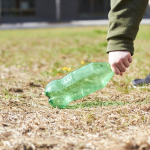