Detailing one of the most important trials of the year

Last year during the last days of May, an event took place in Minneapolis, Minnesota, took the nation by storm.

On May 25, 2020, George Floyd, an African American male, died as a result of police officer Derek Chauvin using alleged excessive force to arrest the assailant.

A video was captured of the incident showing the officer with his knee on Floyds neck for nine minutes and 29 seconds. This sparked a social media frenzy between many groups such as Black Lives Matter which organized protests to call out law enforcement for the harassment that has been building up with other examples of racist and excessive use of violence towards minorities in America.

The demonstrations ended up becoming violent resulting in the Minneapolis police station to be burned by the rioters. Now, almost a whole year after this incident, the trial against Chuavin has started.

I believe this incident itself was the last straw in the countless number of cases that have dealt with law enforcement not being accounted for their actions against minority groups leading to such a pushback by the general public and especially on social media platforms like Twitter, Facebook and Instagram.

Now that the trial is taking place, Chauvin, is now being charged with manslaughter, second-degree murder and third-degree murder in the death of George Floyd. On the ninth day of the trial, medical evidence was shown in the courtroom. In an article from the New York Times, “Dr. Tobin’s testimony was extremely detailed. He counted Mr. Floyd’s breaths and zoomed in on a still image of the arrest to pinpoint the moment that Mr. Chauvin’s boot left the ground, putting additional pressure on Mr. Floyd. He even identified the few seconds where Mr. Floyd slipped from consciousness. Despite its nuance, the overarching message was clear, that Mr. Floyd died from the pressure applied by Mr. Chauvin.”

This is the best evidence that shows the initial confrontation. Video evidence is extremely important and the fact that Tobin could identify the breaths of Floyd seems to be the strongest and most important detail. I also disagree with many of the accusations that this could have been an overdose on drugs. During the autopsy, Floyd had traces of fentanyl and methamphetamine in his system, yet this did not mean he overdosed since Tobin described “Mr. Floyd appeared to be breathing at a normal rate before he became unconscious.”

I believe that there is substantial evidence that has been put out to prove that Chauvin is guilty on the accounts of manslaughter and second and third-degree murder. With the amount of upheaval his actions have put our country through. The nationwide protests and riots showed everyone the true scale of the problems in our law enforcement and the excessive force that does not need to be used on individuals. Also with the result of the excessive force on the minority groups during the protest, rather than helping and cooperating with the protest, the police brutality that occurred agitated the protestors and ended in the protests turning into riots and violence.

Benjamin Stock can be contacted at:
bstock@kscequinox.com 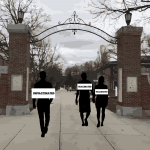