My world as I see it… NOT

Being a person who is visually impaired, it’s never easy. There are a bunch of things that are done differently and there are also many things I must be aware of.

One great example of this is looking for the correct bathroom. To a normal person, they can see the symbol from any reasonable distance, but for me, on the other hand, it is not that simple. I have two different options: one is to wait for someone to go in or out of the bathroom and see which gender they are and then I’ll know which one to go into. Or I have the option of moving closer to the sign, which means about six inches away, and then hope no one sees me if I get it wrong the first time.

Most of the time, I go with what is familiar. For instance, I don’t know of any other bathroom on campus except for the one on my dorm floor. This sounds crazy to think about since there are so many bathrooms on campus, but that is one of the downsides of being legally blind.

Another thing that a lot of people take for granted is seeing friends or anyone who greets them as soon as they speak, but for me it is a little different.

For me, if someone says, “Hi Cameron,” then I would usually say “Hey,” but without their name attached to that statement, mainly due to the fact I cannot see who I am talking to right away. It takes about 30 seconds for me to recognize someone. This process is usually done by recognizing their voice or general context of where I am and who can be in the area. This makes it hard to greet people first and I rely on them talking to me first.

Another great thing being done differently is looking at my phone. Thankfully I have the newest iPhone that has a lot of accessibility tools already on the phone such as larger text but sometimes this is not enough, so I will have to take a screenshot of text messages. There is always the option of looking at the phone closer, but I’ve never wanted to come across as ‘different’, especially in public situations where first impressions are key.

This is the same situation as when someone might want to show me something on their phone: I would usually pretend to see even though I can barely see it.

The cool thing about being legally blind is that it is a hidden disability that would not be detected right away unless I made an effort to show it, as opposed to different disabilities such as being bound to a wheelchair where that is much more obvious to others.

In conclusion, things are done very differently as a visually impaired person compared to a sighted person. These disadvantages never feel like disadvantages.

They have made me who I am as a student and adult learner, and make me unique compared to the average college student at Keene State College. 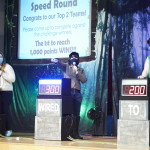 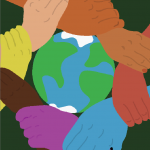