If you were waiting for the Redfern Season Kick Off party for the year 2020, there’s an update for you: The Redfern will not have its annual kick-off party this year.

According to Redfern Marketing and Grants manager Sharon Fantl, “This is one of the years where it didn’t make sense how to put it together.” She further said that it wasn’t as much of a priority in the scheme of things like implementing safety protocols in the building and faculty focusing on having their classes safe and virtual.

Fantl thinks that by not having the kick off party, the Redfern missed an opportunity to let the campus and other community members know what they can expect regarding Redfern events. However, she said, “We should be exploring other ways online and using social media and creating video to give everyone a bit of a perspective of what students and faculty are working on and what artist they can expect to have some interaction with over the course of this season.”

The Redfren press release was published on Friday, September 11 and informed readers about the Redfern Arts Center launching virtual performances and programs this fall. According to the release, “the Redfern’s Fall Programs explore Human Resilience with Gorgeous Guitar and Cello, a new Podcast Series, a Dance Film and a Downtown Choral Concert.”

On September 20 at 3 p.m., the KSC Music Department will be presenting its Faculty Recital Series with professor of music Dr. José Manuel Lezcano who will present a virtual recital and lecture entitled “Guitar Music of Brazil”. The Faculty Recital Series will continue with “Bach to Brazil” with Dr. José Lezcano on guitar and lecturer in music at Keene State Dr. Rebecca Hartka on the cello, according to the press release.

Dr. Hartka is excited to share live music with people in an indoor space again. She said, “I haven’t played in concerts in a long time other than back in June [when] I did one outdoor concert. It’s very exciting to be able to play publicly [in front of campus public] again because it’s such a wonderful experience. This will be my first concert back in a concert hall since March… It will be a short concert, also, to make it safer.”

She further said, “You don’t realize sometimes what you miss until you have it back again, so I’m very much looking forward to that experience.”

According to the press release, the Redfern is launching its new monthly podcast series, “Inside the Redfern”. The release said, “Developed as a partnership with the KSC Department of Journalism, Multimedia and Public Relations, the podcast explores how and why artists, students and faculty at the Redfern create, collaborate and share their work.”

According to the release, the first episode will air on September 18 and can be accessed from the Redfern’s website http://www.keene.edu/arts/redfern.

According to the press release, KSC Theatre and Dance production of “Brangelina”, an original dance film event, will be running from October 15-18. The production is conceived of and directed by KSC Coordinator of Dance Cynthia McLaughlin.

McLaughlin said, “It will be streaming from the Redfern website, you can go there and see it and it will be followed by a Q&A with me and some of the artists (dancers). If you’re not able to make the premiere, it’ll just be available on the website all weekend.”

McLaughlin shared that “Brangelina” is a dance piece that she had worked on last semester and wasn’t able to share it, “I am reimagining it as a dance film so it’s really transforming, shifting and changing to fit within the guidelines that we’re all living under the COVID and also just raise in a new dimension in film.” She further said, “there are actually a few different sites in Keene where we will be doing site specific work and filming, that will be fun for viewers who might know the Keene area ….”

Mclaughlin described her movie as a little bit dark but that “there are some moments of absurdity,” she said. “I think it’ll be a lot of fun in the end.”

McLaughlin is working with ten students. Five of the ten students were in the original work last semester who were interested to stay this semester as well and the other five students are all first year students that auditioned and were selected.

The press release states that the October performances will also venture into hybrid and outdoor spaces with the Keene State Concert Choirs performing on October 17 at 3 p.m. in the Central Square Gazebo.

Fantl said that they are working with the city of Keene to  safely have audience members in the town but not in the square itself. She said that they are planning to have the audiences in the local businesses around where they’re able to hear the concert and also get a meal at the same time. She said, “it’s a really nice opportunity and partnership with the city in that there’s some revenue for the downtown area and this way we are supporting the downtown businesses and at the same time we are able to be innovative where we cannot invite audience members into a venue, there are these opportunities to move outside in some cases.”

According to the press release, “in mid-October, the Redfern will host artists Music from the Sole, NYC-based tap dance and live music company drawing from Afro-Brazilian, Tropicália, soul, hip hop, house, to offer some virtual workshops on tap and percussive dance. Community engagement offerings will be announced as the fall progresses.”

Through the press release, the Redfern is also encouraging the campus and community members to purchase memberships. The statement said, “Now more than ever, memberships are an excellent way to support the cultural programming that audiences value at the Redfern and our commitment to the communities and artists we serve. Members enjoy exclusive digital offerings and virtual member programming.” 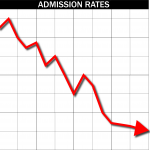