Sophomore Gavin Key’s “Tale of Two Sams” was a film telling of the lives of two different students named Sam that attend KSC. Sam Khumbula grew up in Zimbabwe and came to Keene State to further his education. On the other side, sophomore Sam Howard grew up in Keene and embarked on a gap-year program that changed his perspectives. Both Sams live two very different lives, but the film showed that they have the shared experience of being grateful for the simple things in life.

Costa was unavailable for an interview.

Daniel Brierley’s “I May Destroy You: Reframing Sexual Violence Through a Modern Lens” focused on how mainstream cinema and television depict violence and further examined rape culture.

At the end of the panel, tokens from the department were given to the seniors to wear at graduation.

Film Professor Jiwon Ahn described the preparation that went into the conference. “I ask around to my colleagues, if they have any recommendations [of students to present] and reach out to certain students who are recommended,” Ahn said. “… And then kind of curated a series of programs.”

Many of the films presented were from students who took the Cinema and Diversity course, a class designed by the film faculty. “It’s a relatively unique class for Keene State,” Ahn said. “… It’s more about exploring diverse ways of life and how that exploration informs students’ filmmaking and thinking about their own project.”

Ahn said it is important for film students to study diversity because of how film often reflects society. “Film is a social practice,” Ahn said. “… Films are made to be shown to a number of people. So because of that, it is automatically a social practice, the society is involved.”

Ahn said he was impressed by the work of the students, “When you present  to a larger group of people, and you realize that you’re in a conversation that’s ongoing in the field, that’s what academia is about,” Ahn said.

Additionally, Ahn was pleased with the turnout of the event. “I was pleasantly surprised that people from outside the film department came,” Ahn said. “People that I didn’t expect to show up came just because they wanted to listen, that was fantastic.”

On Friday, April 29 at 7 p.m. there will be a Film Festival held in Putnam Theater along with a Capstone Screening the following day at 1 p.m. in the Redfern Arts Center. 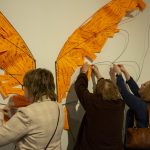