Campus Safety is asking students to practice caution and vigilance following an incident on November 30.

According to an email sent to KSC students, “On 11/30/2021 at between approximately 2:20 p.m. and 2:30 p.m., Campus Safety was alerted to an incident that was reported to have occurred on Appian Way in the area of Quad. In this incident, a female student was approached by a white male described to be in his 50’s, approximately 6-0 to 6-2 tall, wearing a dark blue hoodie and a backpack that was a darker blue than the hoodie. The two crossed paths and then the male turned around and approached the female from behind. The male then touched her arm to get her attention and then asked her for money. The student told the male that she had no money and the male walked away.”

Campus Safety asks that anyone with information should contact them immediately.

As of November 30, the suspect has not been identified and no further action has been taken. 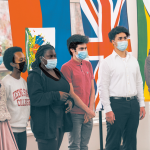