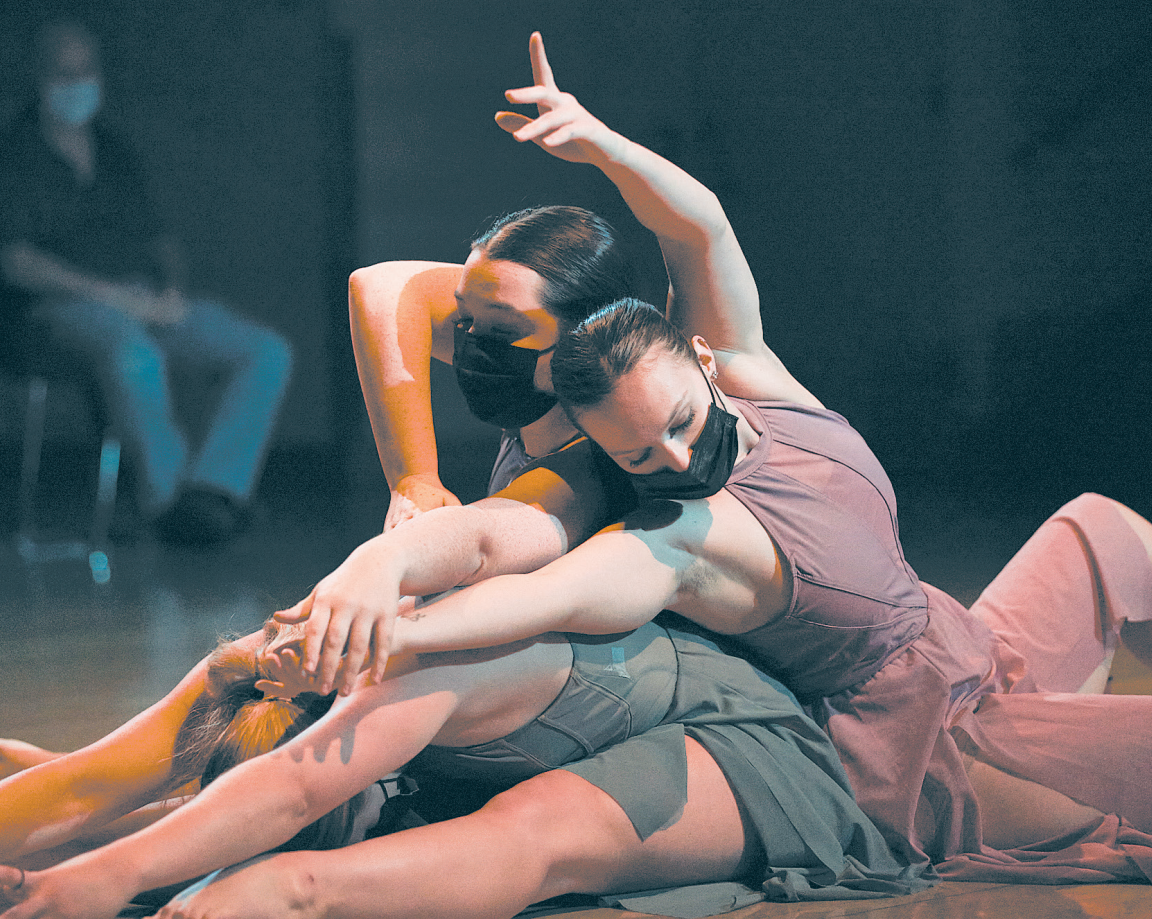 Students performing in the Choreography Showcase, which was held in the Mabel Brown Room on December 9 and 10. The showcase featured the work of several student choreographers.

Professor Cynthia McLaughin’s Research and Choreography class (TAD 318) performed their Choreography Showcase on December 9 and 10 in the Mabel Brown Room.

TAD 318 is a class offered at Keene State, specifically for upperclassmen dance majors and minors to self-choreograph numbers for their peers. Throughout this semester, the class has worked on choreographic principles to share with each other for feedback.

McLaughlin described the preparation the students put in for the showcase, “They come to class twice a week… but then they also have to rehearse at least twice a week for two hours each time and go to each other’s rehearsals.”

The students began the semester with a “point of departure,” a research principle which the students use to base their choreography around. “That research might be something that they do online or write,” McLaughlin said. “Then they translate that research into the body.”

Senior and student-choreographer Kendall Page’s segment of the showcase was titled, “Therein Lies the Catch… made you look” and it explored the concepts of euphoria, the butterfly effect and chaos. Page also incorporated the genres of contemporary and hip-hop.

Page based her research around substance abuse occurring at party life. “This initially started with me [researching] rape culture,” Page said. “Then it led me to substance abuse and the effects and how it impacts people’s connections they make in [their] everyday lives.”

Page enjoyed her time choreographing because of the community it created. “I would say my favorite thing was how close my class got,” Page said. “It was very comforting and fun getting to work with everybody.”

Junior Chloe Cina also said she had a lot of fun with the choreographing process. Cina said in an email statement, “My favorite part of the process was being able to see my piece come to life. My cast is all freshmen, so seeing all their hard work finally paying off for their first college show has been extremely exciting for me.”

Cina’s “A Mare’s Visit” is centered around dream paralysis and the vivid dreams one experiences during an episode. As Cina was researching how dream paralysis affects people, she came across the concept of a “mare.” Cina’s section of the program notes said, “A mare is a malicious entity in German Slavic folklore that rides people’s chests while they sleep, bringing on nightmares.”

Cina brought this concept to life by showing the contrast between her dancers portraying “sleepers” and the dancers’ portraying “mares”. She described, “A lot of my choreography involves chest movements and hand gestures… Four dancers would be demons and three dancers would be sleeping… I was encouraged to make one of the dancers I assigned as a demon to be a ‘head demon.’ This is where I think my piece finally took off.”

Along with Page and Cina’s intricate choreography, there were also four other choreographed segments in the showcase. Junior Maria Sulc’s “Iris” portrays the exploration of one’s body in relation to others and takes artistic inspiration from Van Gogh’s “Irises”.

Amanda B. Smith’s “An Odd Feeling” centered around the 1950’s lifestyle and the effects the Cold War had on American families.

Junior Katelyn Sova choreographed a segment entirely consisting of songs by The Rolling Stones. Her segment included classic hits such as “(I Can’t Get No) Satisfaction,” “Blue and Lonesome” and “Miss You,” while highlighting the development of the group’s music.

The showcase’s conclusion, “Muses a Gogo,” was choreographed by senior Melissa Ray and centered around the style of the 1960’s. As stated in the program notes, Ray “immersed [the audience] in this reimagined world… through connection, playfulness, competition, self-indulgence and curiosity.”

McLaughlin said she is proud of the dedication of her students and their expression. “[They] really dig into their own personal interests and creative interests while being a really strong member of a collaborative community,” McLaughlin said. “I think that’s one of the best balances someone can find.”

Page said this experience has impacted her understanding and appreciation of dance. “I’m going to be thinking about the process differently, whoever’s piece I’m in,” Page said. “Just letting things happen… Eventually it’s all gonna come together and just accepting that.”

This showcase allowed Cina to learn more about different dance movements. “It has taught me how to naturally move,” Cina said. “All of my choreography was created by natural movements… As a dancer, this allowed me to think about my movement and how I can break specific barriers.”

“This group in particular has been really strong in supporting one another,” McLaughlin said. “It’s not until you bring the work to the audience that it actually becomes the work.”