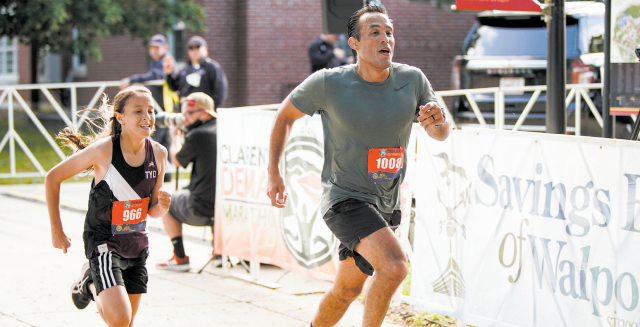 The full marathon was won by Walthm, MA resident Conor Sleith with a time of 2:28:42. As Sleith approached the finish line the speaker system played victorious fanfare. As Sleith crossed the line, he hobbled over to the Fiske Squad and collapsed onto the ground in joy and exhaustion. Sleith bested the second place runner, Arthur Smith III, by around 20 minutes. Smith’s time was 2:43:36. However, the marathon was not the only race that day. The Clarence Demar Half-marathon was run at the same time.

The winner of the women’s half-marathon Chloe Maleski said, “It was an honor and it was fun to run in my hometown because I grew up running here.” Maleski also said she was training for the Boston Marathon and was recommended to run the Clarence Demar race from her friend, Thomas Paquette, who won the men’s half-marathon for his fifth time.

Paquette said he was running this race to train for another race he is running in December. Paquette said winning his fifth Demar halfmarathon “felt good” and that it is “like putting a performance on for the community and it was showtime.” Paquette said during the race he was putting himself through a workout to keep his mind off the race and before he knew it the race was over. Paquette also said throughout the half-marathon, he did not feel a point of quitting because “all these roads I’ve run a million times… They are the roads I train on.” The Clarence Demar Marathon is not just a race known in the Northeast, runners from all over the United States travel to participate in the marathon.

New Orleans, LA, resident Darvy Soigné said he traveled to New Hampshire for his first time to participate in the race. Soigné said he picked the Clarence Demar race because he found the organization online and wanted to run a half-marathon for his new years resolution. He said “it was my second time running a half marathon and it has been a long time since college.” Soigné also said running in New Orleans and New Hampshire is different. Soigné detailed “There are a bunch of hills… I wanted to walk at some points, but I told myself ‘not to walk this race’.” Soigné said to train for the race he started at running two miles then would run three, then four, all the way until he was at seven.

The Clarence Demar marathon has been and will continue to be a landmark ‘must-run’ race for serious distance runners who are looking to qualify for intense distance races like the Boston or New York Marathon similar to Thomas Paquette and Chloe Maleski or runners may join to push themselves like Darvy Soigné. Either way the Clarence Demar marathon remains a pinnacle of Keene New Hampshire’s community