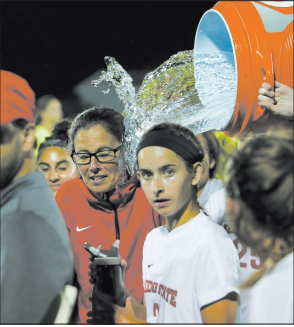 New head coach Sarah Testo getting water dumped on her in celebration of her first career win.

It was Owls vs. Owls at Dr. Ron Butcher Field Thursday evening on September 16, as Keene State took on Westfield State in a close match with Keene’s Owls coming out on top. Westfield was first on the board with a close-range goal 20 minutes into the game. However, not even a minute passed by before sophomore forward Maya Baker tied the game with a goal assisted by junior midfielder Kayleigh Marshall. This was Baker’s first goal of the season.

With six minutes left in the first half, the Owls earned a penalty after first year forward Raelyn Callahan was fouled. Senior defender and captain Alex Kennedy scored the final goal of the night with a penalty kick aimed at the top right corner of the goal, securing Keene State’s 2-1 victory.

The Westfield Owls made many attempts to tie the game in the second half but were unable to capitalize. Westfield outshot Keene State with 16-8 shots, and 5-4 in shots on goal.

Following their first win of the season, Keene State is now 1-3. Their next game will be against Amherst College on September 19. 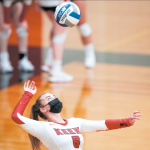 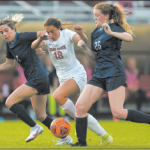