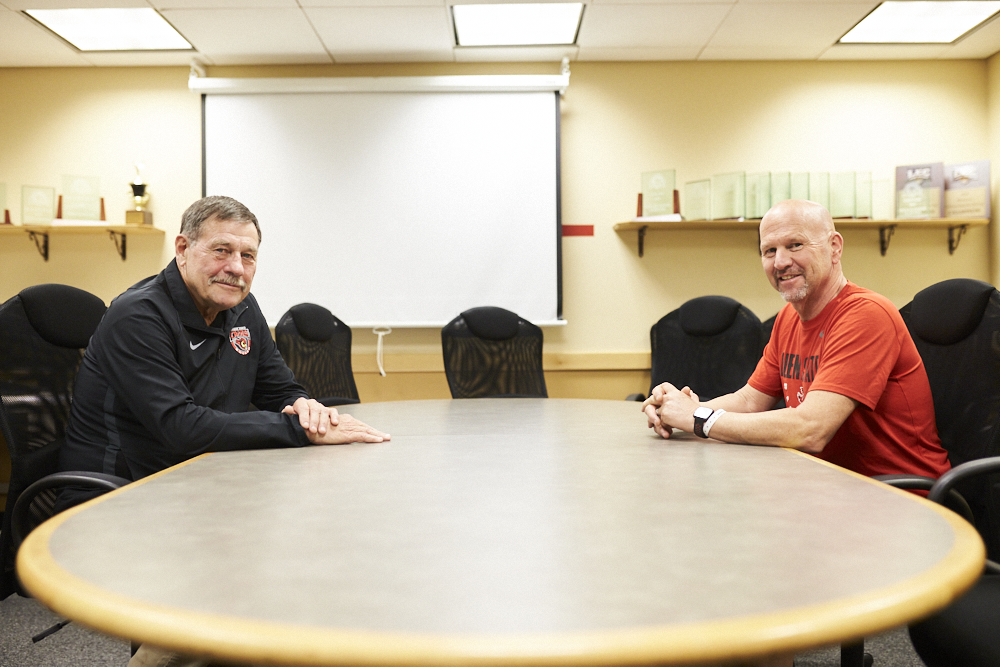 David Hastings and Rick Scott are way more than just coaches at Keene State College; they’re both veterans who served for the United States Army.

“I joined right out of high school,” Hastings said. “I signed up for the 82nd Airborne Division, the air troopers. I was stationed in Fort Bragg, North Carolina. We went on a mission every six months. We went to Germany, Panama, Spain, Honduras, that’s all the overseas missions I did. I had 76 jumps out of airplanes, I was an infantryman. My unit was the 1st 504th Airborne Infantry, which means we jumped out of planes, then in basic infantry I was on the ground fighting. I served from 1982 to 1986, and the only active combat I saw was in Honduras. At the time, they only considered it a conflict, not even a war.”

“I was in the Army, I was drafted in 1968,” Scott said. “I went through basic and artillery training in the states, basic training at Fort Dix in New Jersey and then I was shipped to artillery training in Fort Sill, Oklahoma. From there, I went for five to six months to Fort Bragg, North Carolina. I spent the last 10 or 11 months of my tour of duty in Vietnam. We lost about 60,000 lives in that war.”

Although Scott did indeed serve in war zones in Vietnam, he said that he was never forced to go. Rather, going to Vietnam was a choice he made on his own in order to protect his brother.

“Ironically, I had the option of staying in the states or going,” Scott said. “I didn’t have to go, but I had a brother over there. Growing up, he got caught doing everything, I never got caught. I thought he might have bad luck over there, so I went so he could come home because you could only have one sibling in a war zone. He stayed for a month or two over there with me, then he came back and finished his tour of duty. So I basically volunteered to go over there and was with an artillery unit in Vietnam.”

According to history.navy.mil, the Naval History and Heritage Command website, the United States military made the rule that only one sibling at a time could be in a warzone after the Sullivan Brothers tragedy that happened in World War II. On November 13, 1942, five brothers named Joseph, Francis, Albert, Madison and George Sullivan all lost their lives when the ship they were in, the USS Juneau, was sunk in the Battle of Guadalcanal. After this, the United States military enacted policies that would prevent a tragedy like that from ever occurring again.

Since their time serving, both Hastings and Scott have enjoyed plenty of Veterans Day celebrations, and said that the celebrations are very meaningful. However, Veterans Day is also often bittersweet for both of them.

“The most touching one is the one at French King Bridge in Gill, Massachusetts where I was the Chief of Police for 24 years,” Hastings said. “They have a great memorial service on the bridge for Veterans Day, great in general. I think having parades for the ones who passed on and the ones who made it back is no easier now than it was in World War I, World War II, the Korean War. They put their lives on the line every day for our great country.”

“I was very proud to serve our country and respect the flag,” Scott said. “Veterans Day has been different over the years, there have been different parades, different get-togethers. KSC puts on a luncheon for veterans every year. I don’t know if they will this year or not because of COVID-19, but it’s always fun to sit with a bunch of guys and talk about different things. You also lose good friends at war during your tour, and that makes it tough on Veterans Day, it brings back those types of memories of those guys who didn’t come back alive.”

Scott said that not only does he have mixed emotions each Veterans Day, but he also had mixed emotions when originally returning to America from Vietnam.

“There were a lot of mixed emotions when we came back from Vietnam,” Scott said. “We weren’t treated well at all when we came back, there were a lot of protests. We didn’t come home like the guys in the world wars, it wasn’t like that. People were saying we shouldn’t have been there in the first place. There were people at Kent University killed in protests. But I have no regrets for going to Vietnam, no regrets for serving my country. It was a great learning experience. You grow up pretty quick when you’re 19 years old going through basic training for war 14 to 15 hours a day. They were long, strenuous days, seven days a week, no days off back then in basic. But if I had to do it again, I would do it all over again. I wouldn’t hesitate a second.”

Hastings and Scott said that joining the Army taught them a lot of valuable life lessons at a young age that they still hold onto to this very day.

“The best part is when I enlisted, I was one of those young people making poor choices when I joined, I was in an area with lack of commitment and respect,” Hastings said. “It taught me some great fundamentals to carry on for the rest of my life. After that I went into law enforcement, and those fundamentals have carried on.”

“I think it made me mature quickly, made me appreciate the USA,” Scott said. “Having the chance to protect the country makes you appreciate it, spending time in a warzone protecting and working for the country. You do it because you love it and you’re proud of it. The experiences you go through in a warzone, it’s hard to say or explain what you’re feeling when you’re there. You’re scared to death, you don’t know if you’ll wake up the next morning dead or alive or if you’ll make it through the day. It depends on your job a lot, mine was with artillery. Infantry guys, they’re the guys who really went through hell more than anyone else.

There’s lots of different jobs, you’re called upon to do everything. You have to be ready to do anything they ask you to over there. You learn to adapt and overcome real quickly. It’s a good experience for the real world too. It taught me a lot about teamwork and learning to work with guys you like and guys you don’t like. It taught me about building trust and learning to trust and that respect is earned. All this happens in combat and non-combat situations. When you go through that and then you’re getting a job, you don’t say, ‘I haven’t done that before, I can’t do that,’ you just do it the best you can.”

Furthermore, Hastings and Scott said that serving in the Army not only affected who they were as people, but it has affected how they coach their teams at KSC now as well.

“Those fundamentals have even carried into how I coach,” Hastings said. “I’m a no excuse kind of person. If you have something you need to do, you need to do it, and that’s the way it is. The only thing I don’t like is when I hear Coach Cain if he uses words at practice like, ‘We’re going to battle tomorrow, we’re going to war.’ This isn’t life and death, it’s playing basketball. I think it’s disrespectful when you equate getting a rebound to not getting shot. When they talk about being at war, I say, ‘No you’re not, you’ve never taken gunfire together, you’re going to try to get a rebound together.’ But that’s just me, I’m an older generation. I have children as old as Coach Cain.”

“It does somewhat connect with coaching,” Scott said. “The discipline you have from the military, the commitment you have, the structure you have, all those are part of being a good soldier. When you’re put in a combat situation, you’ve got to be ready, be on your toes, think on your feet. Someone could save you, you could save someone. Being ready to make decisions in a split second too, that does help with coaching. Those are some of the biggest attributes, dealing with the unexpected and telling yourself ‘Don’t panic, be a leader, lead by example.’ Things like that, things that you pick up in the military definitely helped form my coaching philosophy.”

Interestingly enough, Hastings and Scott said that when they met each other, they could tell right away that the other had served in the military as well, and plenty of mutual respect was given.

“Dave is a good guy, we had a connection right away,” Scott said. “We had that mutual respect, we knew we shared the same experience. That’s what makes it cool, it’s like a big fraternity.”

“I think it’s not a negative to anyone else, but anyone who served carries themselves a certain way,” Hastings said. “You can feel that from men and women who served, you can feel that based on the things they’ve gone through.”

Now, with COVID-19 likely to make for more dialed-back Veterans Day ceremonies this year, Hastings says he understands why, and thinks that we should all continue to give our best efforts towards staying safe and healthy.

“I’m sorry it’s going to be that way this year, but I understand it and I respect it,” Hastings said. “It’s been a trying time for everyone worldwide. Everyone will try to honor us still, but in essence we have to think of health and safety, keep social distancing, keep gatherings at a minimum and do what the government tells us to do.” 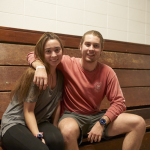 Siblings that swim together, win together Previous
What comes next for athletics? Next 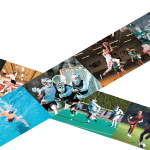