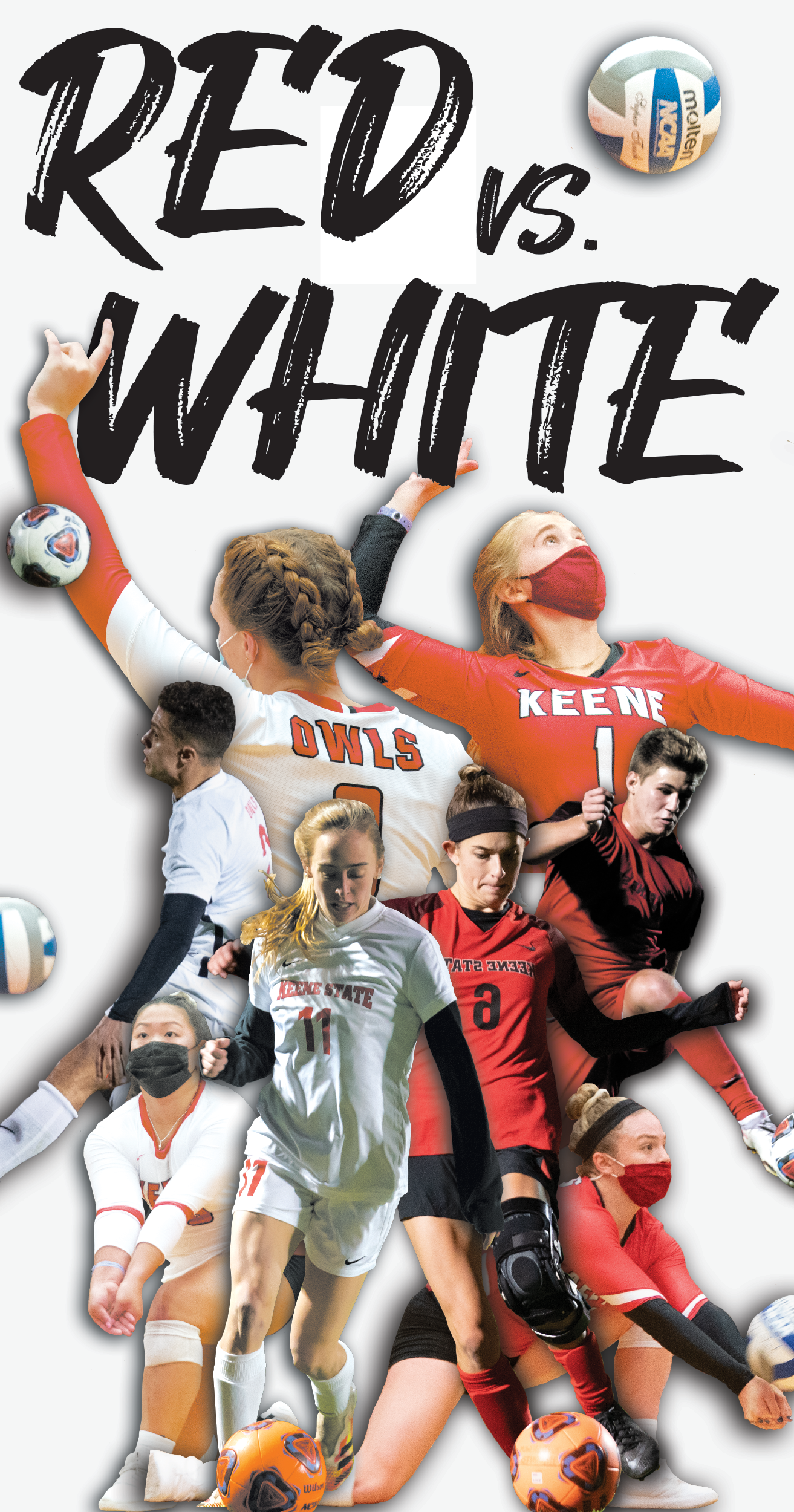 Approximately two weeks ago, fall sports competition returned to Keene State College with a set of ‘intrasquad scrimmages’ scheduled for men’s and women’s soccer, volleyball and field hockey. This meant that the players on each team would have to compete against one another, with the full rosters of each team being split in half, creating two separate teams to play against each other.

Out of the games that have happened so far, players and coaches from each sport have all generally thought the same thing: It’s great to have sports back at KSC, albeit a bit different.

“It was super fun, I definitely had a really good time,” said Megan Palmer, a senior outside hitter and captain on the KSC volleyball team. “It was definitely a little nerve-wracking going into it because we’ve all played together, so we all know how each other play; maybe the freshmen not so much but it was definitely like, ‘Oh my gosh, I know exactly what they’re going to do.’ You wouldn’t expect it to feel like a real game but it definitely did. I’m really happy we get to play.”

“I think it went really well,” said Courtney Chouinard, a junior utility player entering her second year with the KSC volleyball team. “It was cool to be competing against our teammates and I felt like it was stronger competition because we knew what the other team was going to do. Like we know Ali [McLoughlin], we know Sarah [Williams], we know what they’re going to do. So we had to work harder to work around their defense and what we knew they knew how to protect against. I think everyone did a really great job and I think a lot of people showed their strengths, especially the freshmen. They came in and really proved themselves in the first game.”

“It feels good to be back playing,” said Rick Scott, the head coach of the KSC men’s soccer team. “We went through the whole gating period and then pods of three and groups of 10, and then to get to a point where we could finally have 11 versus 11, full scrimmages, is really good. It felt great for the kids, they worked through the whole process and we’re all happy to be where we are now. We’re going to keep going, keep working and training three or four days a week up until Thanksgiving.”

From the players’ perspectives, one of the unique circumstances that made the intrasquad scrimmages vastly different from normal NCAA competition was the fact that they were competing against their own teammates. In other words, this meant that the players on both teams had to face competition who knew their tendencies and weaknesses better than any player from any other team in the NCAA.

“I definitely had to think harder about what I was going to do and what my next move was at the net,” said Chouinard. “I hit across a lot, so I knew our coach on the other side and the girls would set up a certain way against me and make sure I couldn’t do what’s strongest for me. So I really had to go into my toolbox and figure out what I was going to do to make it work, and I feel like everyone on the team was in that same mindset.”

“It was funny before the game started, I think I said to someone, ‘Ali [McLoughlin] isn’t going to do this, so don’t worry about that, just worry about covering this,’” said Palmer. “I’ve played with her for the last three years, so I know. But there was one ball that she hit in the middle of the game and it went straight down and everybody looked at each other, and I remember yelling to her across the court, ‘Ali, that was a really good swing!’”

Another element from the intrasquad scrimmages that has challenged players has been having to wear a mask during gameplay. Although wearing a mask is optional while physically competing in the scrimmages, most players from the Keene State fall sports teams have elected to do so, keeping health safety as their top priority.

For Palmer and Chouinard, they said that their head coach, Bob Weiner, asked his players to wear masks while in gameplay for multiple different reasons.

“The reason Bob is having us do that is when we go play at Rhode Island College (RIC) in two weeks, he doesn’t really want us at the net with those other teams, because we have to get pretty close,” Palmer said. “So he just wants us to get used to playing with them on so that when we play other teams we can feel comfortable.”

“We’re different from other teams because the rule is that you can take it off if you’re doing actual activity, but coach said we’re going to wear them,” Chouinard said. “I think that was really smart of him too because I would say I’ve gotten pretty used to it. It’s still weird sometimes, like when you’re breathing really heavy, it’s something blocking you. Like when I tell people we play games in full masks, they’re like, ‘What? That’s impossible.’ But no, I didn’t even realize I was wearing it, it’s fine. So I think if we get to RIC and Plymouth [State University] and if they haven’t been doing that, we’ll have an advantage over them.”

Although COVID-19 is always a concern, the players and coaches have said that they don’t have too many worries, as the intrasquad scrimmages are played in a safe environment with proper protocols.

“I’m very comfortable with it because our athletic department is holding us to pretty high standards,” Scott said. “We know our COVID-19 test results and have been good with them, my guys have been good with things like staying socially distanced, staying aware of small gatherings and staying masked up the whole time they’re on the sidelines, having our whole staff wearing masks.”

“I definitely feel safe, the masks were a force at the beginning I thought, but as we went on it just made more sense,” Palmer said. “We don’t really feel them anymore, it’s just like a part of you now, you just play. We’re all very close knit compared to other teams, so we all know what each other are doing most of the time. We’re not really separated, everybody has their little groups within the team and we kind of keep each other straight in terms of what we’re doing outside of volleyball and keeping each other safe. I feel safe around these girls, especially with getting hand sanitizer before practice and our temperature taken.”

“Coach Weiner is taking it so seriously,” Chouinard said. “He is really on top of making sure everybody’s safe and is really pushing safety. We practice with masks on, even though we don’t have to. So we always are wearing masks, we never take them off. So I feel really safe doing that, and I know our team is responsible and doing what they’re supposed to be doing, following what we need to be doing. I feel safe being with those girls and being with our coaches who are really responsible and on top of the safety.”

However, for Scott, one of the things that has become difficult with the intrasquad scrimmages has been finding referees to officiate the scrimmages, along with making sure that those referees are healthy and COVID-19 free.

“Our biggest issue is getting referees because refs need to have a negative COVID-19 test from within the last week and not a lot of those officials have that or are doing it,” Scott said. “So they can’t ref a game here unless they’ve had a test. They have to meet our level of guidelines and protocol to make this game happen. They have to figure it out. I had an official show up last night and he hadn’t had a test within the last week, so he couldn’t work the game. They (Keene State College COVID-19 guidelines) are strict, I get that.”

Despite the fact that this semester is quite different from any other semester we’ve experienced before, paired with the fact that these scrimmages don’t officially count for anything, the student-athletes at KSC are still having fun and keeping up their competitive spirits.

“It’s funny because we’re really intense, but then in between a point I see Ali [McLoughlin] or ‘Chile’ [Emilyann Ashford] on the other side of the net and I’m just like, ‘Oh, hi guys,’ like it’s back to normal,” said Chouinard. “But it was definitely cool to compete against them because we had to think harder about what we were going to do and what they were going to do, because they were doing the same thing. I think everyone has the same mindset; we want to play, we want to keep going. We’re all on the same page.”

“It was cool to compliment each other and be able to play not having that, ‘Oh my gosh, we lost a point,’ like, freakout,” Palmer said. “It was just loose and fun. There was nothing riding on it, it’s not like it was a conference game or anything. It was also nice that everybody got to play because, obviously, if we were to play real games half the team would be on the bench. I didn’t think I was going to have this [season], so I’m just so thankful that we get to put this together and that we’re going to have that.” 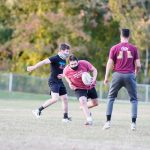 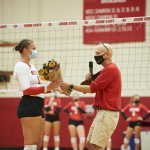