The 2020 fall semester is officially underway. Some classes are online, some are in person. Some students are happy to be back on campus and some students aren’t. I can tell you right now that I fall into the latter category.

Personally I am happy to be safely seeing my friends and be out of quarantine. It’s nice being in Keene again, and I’m sure many people would agree with me. Even though it’s nice to be back, the problem is: how Keene State has handled this pandemic since we’ve been back.

Within days of some students being back, the college saw its first confirmed COVID-19 case of the fall semester: an RA that was sent to quarantine in Monadnock Hall. A few days later, an off-campus student, like myself, tested positive. Although the college found these cases quickly, my problem has to do with the lack of communication with students and family.

Coming back, I thought the school had a good, if not great, plan for returning safely. No one would be allowed back without a negative test, hybrid learning, and weekly testing were among the things the school planned to do to keep us safe. It seemed as if they were being very transparent about their plan until these cases were reported. The Equinox was the first to report on both positive cases. In their report, they quoted Keene State College spokeswoman, Kelly Ricaurte. Although the college notified newspapers of the positive cases the college never sent a direct email about specific case numbers to students or family. To me, this is extremely concerning.

After going multiple days without any updates, I decided to contact President Melinda Treadwell about my concerns, and in my opinion, I received a lackluster response.

In her response, President Treadwell said, “I assure you that we are committed to sharing information about our plan, our monitoring and any actions we are taking. Although I offered briefings to the Equinox, the Keene Sentinel and we posted information in my famous Town Hall, I respect that it still is perceived as not being forthright”.

Treadwell went on to say that she is committed to being transparent about all of this information and that she has been working with other New Hampshire colleges to release weekly COVID-19 data. I will admit that after hearing Treadwell’s response, I felt a little better; but not completely, because, in my opinion, even one case is one too many.

As of when this article was written, we still have yet to get a direct email from the college about the number of students that have tested positive and that is what’s still concerning. The school has been publishing a weekly dashboard that shows the number of cases, but the problem is that the school should be sending this link to students and family at the end of the week every week. There are plenty of students that, had they known there have been positive cases already found on campus, might not have returned and I don’t blame them. To me, while we wait for the college to release it’s data in the coming weeks, it feels as if the school is trying to shield students and families from this information so they can keep as many paying students as possible.

Now, I’m sure the school has a good plan for if there are a certain number of positive cases, but that doesn’t fully put me at ease.

This is an extremely infectious disease, and no matter how well the college does at quarantining and isolating students that have tested positive, it still has the potential to spread like wildfire at a small school like ours. I know many people are eager to have in person learning and see their friends and not have to stare at a screen for six hours a day, but just because we want this doesn’t mean it’s safe.

After only days of being back, the college reported its first positive case; and as the weeks go on, it’s inevitable that there will be more. The college should be responsible about this and notify students and families about every single case that is found, and more importantly, give up on the plan of having in person classes. It’s just not safe.

Tyler daRosa can be contacted at

0Shares
0 0
Zooming around Orientation Previous
KSC Mason Library brings reforms for the safety of students... Next 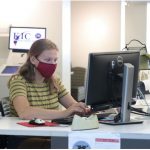