The Keene State nursing program gained its state approval after three years on probation. The program was put on probation by the Board of Nursing shorty after the program was started in 2012 because of insufficient student test scores. The first class of students passed the exam with a 77.79 percent, meaning it was below the average of 48.28 percent. Since there were only nine students, each student’s score weighed a high amount.

Director of nursing at KSC Patricia Shinn said the number of students in the program impacted this issue.

“The year after, 40 students were in the program when the average exam score came out to be 48.28 percent, almost half of what the average was supposed to be that year. At that point the Board of Nursing put the program on probation,” Shinn said.

After the program was put on probation, a curriculum consultant was brought in to see what problems needed to be changed to gain approval from the board. These changes included increased admission requirements, developed progression standards (first two-year pre-med students need to take specific benchmarks) and an overall GPA of 3.4 or higher.

For the board to take the Keene State nursing program off probation, they needed to complete two consecutive years at or above the national pass rate, which was 88.29 percent in 2018. Even though the program failed to meet the average last year by .05 percent they managed to show the board that the package was complete by scoring one hundred percent on this year’s exam, which convinced the board of nursing to give the approval to the program. This is the first time the program has gotten approval by the board. Alongside their approval from the board, the Keene State nursing program received its national accreditation from the Commission on Collegiate Nursing Education (CCNE) for ten years in 2018.

After the program was approved, it could no longer receive funding from the board. “With the combination of River Valley Community College’s nursing program, the two programs have been sharing the simulation lab on campus. As time goes on and the programs grow, there may be a need to generate funds for another lab,” said Shinn.

Since then, the program has added a requirement that all students will have to take 15 days of clinical, medical and surgical classes in every semester of their junior and senior years of college. This gives students more experience in clinical, medical and surgical settings. The nursing program is looking to add RN to BSN back to their program. This means nurses who graduate after two years who want to come back for their bachelor’s degree can complete the same course without taking a different exam.

Matt White can be contacted at 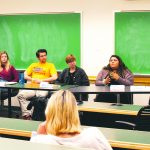